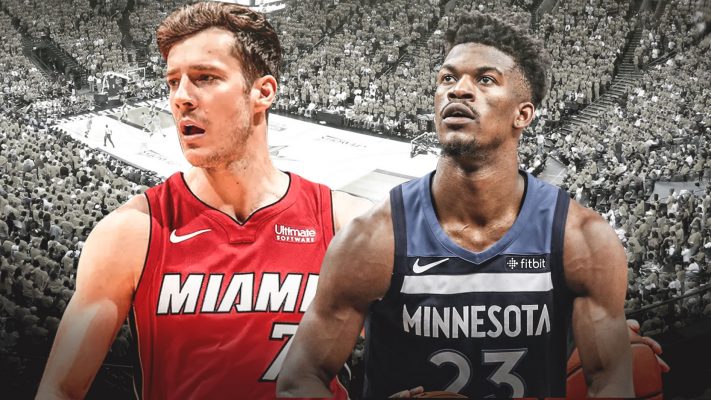 Trade talks to acquire Minnesota Timberwolves small forward Jimmy Butler have ramped up for the Miami Heat in recent hours.

On Wednesday morning, it was reported that the disgruntled veteran and his agent had told Wolves ownership that Miami was his preferred destination. While that is elating news for Heat fans, it might come at a costly price.

According to NBA insider Adrian Wojnarowski, the Timberwolves could want beloved Heat All-Star Goran Dragic in a potential Butler trade:

Phoenix's pursuit of a starting point guard could factor into the Jimmy Butler trade discussions as a potential third-team partner, league sources tell ESPN. If Minnesota trades for Goran Dragic in a Miami/Butler scenario, that could make Wolves PG Jeff Teague available for Suns.

Dragic, 32, is coming off a terrific season with the Heat. The Slovenian speedster averaged 17.3 points, 4.8 assists, and a career-high 4.1 rebounds per game last season while nailing 37 percent of his shots from downtown. In last year’s playoff series against the Philadelphia 76ers, the point guard was the team’s leading scorer with 18.6 points and 4.6 assists a game.

However, potentially losing the Heat’s starting point guard might be worth it for this particular situation. Having the opportunity to score a borderline superstar in Butler doesn’t come often, especially when the available player wants to play for your team. The Wolves guard averaged 22.2 points, 5.3 rebounds and 4.9 assists last season, leading the franchise to their first postseason in over a decade.

The seven-year pro also has a great relationship with Heat guard Dwyane Wade from their time together with the Chicago Bulls. If the Heat legend could show his former teammate how great Miami is and make him feel comfortable, Butler would feel more inclined to stay with the Heat when he becomes a free agent.

Nothing is concrete; yet, this isn’t the time to attach emotions and feelings to Heat players as almost everyone on the roster appears available in trade discussions.
[xyz-ihs snippet=”HN-300×250-TextnImage”]