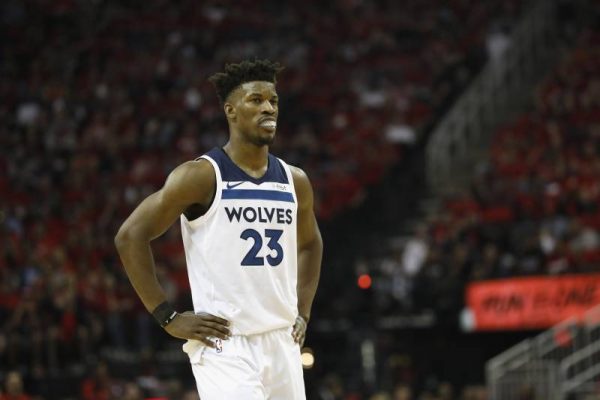 In an effort to accelerate a trade, Minnesota Timberwolves All-Star Jimmy Butler is taking a serious step by sitting out Wednesday night’s contest against the Utah Jazz.

Butler started contemplating not playing tonight on Tuesday, and the final decision was made Wednesday morning, sources tell me and @JonKrawczynski. Timberwolves termed it "general soreness and precautionary rest,” but Butler informed Tom Thibodeau of his decision.

Jimmy Butler is taking next step in six-week-long process aimed at getting the All-Star out of Minnesota by sitting tonight against Utah, and could lead to extended absence for Butler, league sources tell me and @JonKrawczynski.

Butler, 29, has been trying to get out of Minnesota for over a month now. Although the veteran made his trade request clear and the team has been entrenched in drama, the Wolves have been reluctant to let go of the star. In fact, the Miami Heat and Minnesota were close to completing a deal earlier this month, but the Wolves got greedy and negotiations fell apart.

One of the main players Minnesota wants from the Heat is swingman Josh Richardson. The rising youngster, who is on team-friendly contract, is averaging a career-high 19.1 points and 4.4 rebounds per game this season. While the 25-year-old’s numbers have improved, it still doesn’t match the production and stardom Butler brings.

The Wolves star, who recently led the franchise to their first postseason in over a decade, is currently putting up 22.5 points and 5.3 rebounds on a whopping 50.5 percent shooting from the field this year. Although the wait for a trade is taking a long time, whoever gets Butler will undoubtedly get a whole lot better.
[xyz-ihs snippet=”HN-300×250-TextnImage”]