Miami Heat Rumors: 3 Heat Players Could Be Moved This Offseason 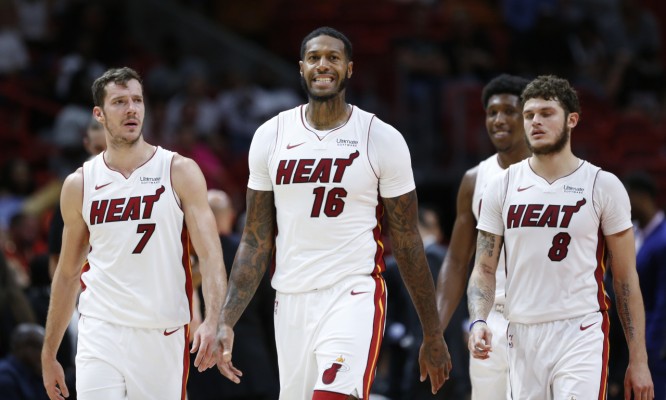 The Miami Heat seem to be well on their way to a playoff berth this season. Based on their performance throughout the 2017-18 campaign, however, it would be somewhat of a surprise if they managed to achieve anything past that.

Given that, it seems likely that the Heat will look to make some offseason moves once their postseason run comes to and end. In a Tuesday morning mailbag, Tom D’Angelo of the Palm Beach Post broke down which current Heat players could be wearing different jerseys by next season.

D’Angelo revealed the potential moves after a fan asked which players would likely get moved so that Miami could avoid the luxury tax.

“First, the Heat can bring all of them back and avoid the luxury tax,” he said. “But you better believe Pat Riley will be looking for a way to improve the roster and likely will make everybody available. The best way to regain cap flexibility would be to package [Hassan] Whiteside ($25.4 million next season) and Tyler Johnson ($19.2 million) or Goran Dragic ($18.1 million). But Miami can least afford to lose Dragic without somehow acquiring a quality starting point guard.

“But how likely? Not sure. But Riley definitely will be looking to make some moves and any among Whiteside, Tyler Johnson and James Johnson, could be moved.”

Whiteside, Tyler Johnson, and James Johnson have been some of Miami’s biggest contributors on the court this season, with all three averaging double-digit point totals per game. While they have been unquestionably productive, if they can play a role in bringing a star to Miami, it seems Riley is prepared to make that tough call.

With a fairly strong free agent class, it’s possible that some familiar faces will have to be shipped off to make room for the perennial All-Star that has been missing from the Heat’s roster for quite some time.

For the time being, the current Heat roster will look to make the rest of the season quite exciting for the Miami faithful. Given this report, however, it seems the offseason could prove to be just as exciting.
[xyz-ihs snippet=”HN-300×250-TextnImage”]