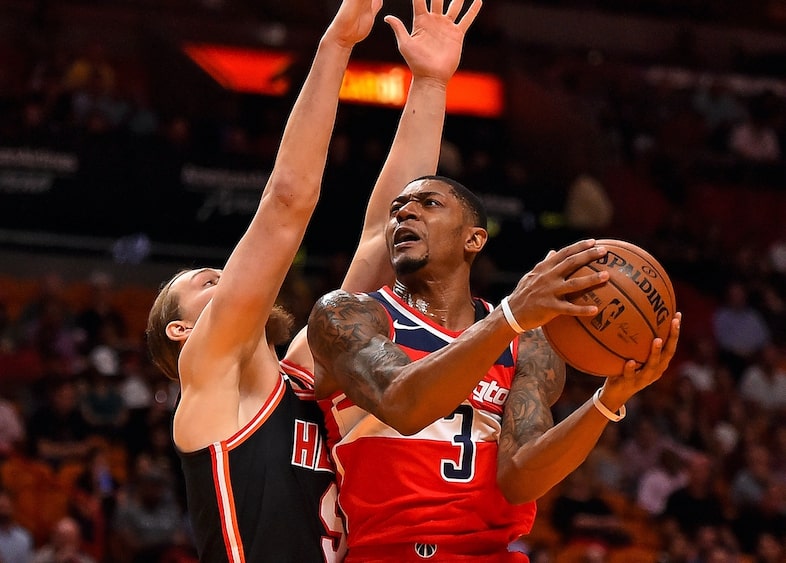 The Miami Heat’s search for another major player to team with Jimmy Butler has led them down many paths, including looking at Washington Wizards guard Bradley Beal.

A new report indicates that the possibility of Kelly Olynyk’s opting out after the upcoming season could play a key role in making a trade for Beal.

Barry Jackson of the Miami Herald pointed to comments that Pat Riley made back in April that could indicate that Heat are already thinking about their options next summer.

“‘Having room doesn’t mean you have to sign anybody,'” Riley said. “‘You can take players in. Room is valuable, but you don’t have to just save it for an unrestricted free agent. Who knows? We could be a bank. We could use it as a bank. Maybe we’re at that state we just want to bank it.'”

Jackson then explained why becoming a bank could help Miami land Beal.

“And if Kelly Olynyk decides, next May or June, to opt out of the $13.6 million he’s owed in 2020-21, the Heat will be in position to potentially become a bank for the first time in many years,” wrote Jackson. “And in the process, the Heat would have a chance to gain a valuable draft asset that could either be used to select a young player or placed in a deal to acquire an All-Star-caliber player such as Bradley Beal, if Washington makes him available.”

The 28-year-old Olynyk averaged 10.0 points, 4.7 rebounds and 1.8 assists per game last season, numbers that were slightly down from his first season with the Heat in 2017-18. Upping those numbers could make him a more valuable commodity in what’s expected to be a weak free agent class next July.

The Heat are looking closely at the free agent class in 2021, with an Olynyk opt-out next year freeing up some cap space. That could be filled by a high-salaried player who another team wants to unload, with the expectation being that the Heat would also pick up a first-round pick for taking on that additional salary.

That draft pick could then be used as part of the package the Heat would need to acquire Beal, who becomes an unrestricted free agent after the 2020-21 season. Beal played college basketball at the University of Florida and spent one season with the Gators before declaring for the 2012 NBA draft.

Another less-desirable way for the Heat to pick up another first-round pick would be to trade one of the players on the current roster by February’s trade deadline. That could be a problem if the team is still battling for a playoff spot, since it would likely remove a key performer in the lineup.

The Heat’s pursuit of Beal will presumably continue for quite a while, with the hope being that he ends up in South Florida. Whether or not Olynyk plays a role in making that happen is a question that still remains unanswered.