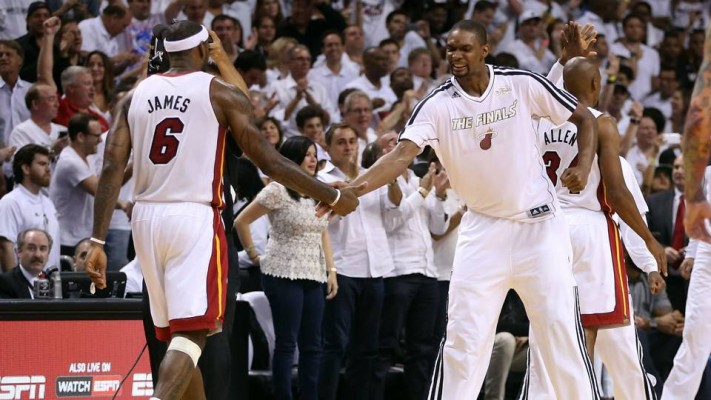 In the wake of former Miami Heat forward LeBron James announcing on Sunday that he was joining the Los Angeles Lakers, speculation regarding the potential comeback of another former Heat player, Chris Bosh, is apparently increasing. One source indicates that Bosh may be petitioning the NBA in the near future for clearance to resume his career with James and the Lakers.

Sean Deveney of Sporting News wrote that Bosh’s argument for getting back on the court would be connected to purported advancements in blood-thinning treatments and his willingness to accept responsibility for any health-related concerns that may develop. Bosh last played on Feb. 9, 2016 before being felled by recurring blood clots that at one point became life-threatening after reaching his lungs. Last year, Bosh and the Heat worked out an agreement concerning the remainder of his contract, with insurance paying the bulk of the remaining guaranteed $52 million that was part of the final two years of his contract.

League approval is required before Bosh can play again, according to Deveney:

“The NBA has a ‘fitness to play’ clause that prevents players from appearing in games while they have life-threatening injuries or illnesses, and for that reason, Bosh has been kept out of the league.”

The 34-year-old Bosh and James both arrived in Miami via free agency in 2010, with the Heat subsequently going to four consecutive NBA Finals and winning two league titles. James then returned to his original team, the Cleveland Cavaliers, in 2014, while Bosh remained in Miami. During his six seasons with the Heat, Bosh averaged 18.0 points and 7.3 rebounds per game.

Bosh has been living in Los Angeles and actually worked out at the Lakers’ facility this past season. Adding to this intriguing situation is that Rob Pelinka, the Lakers’ general manager, was serving as Bosh’s agent at the time he accepted that position.

While the Lakers would love to add Bosh to their roster, the reality of the situation is that getting such clearance from the NBA would be difficult, given the prospective horror of a worst-case scenario in which Bosh dies as a result of resuming his career. The NBA undoubtedly wants to avoid a repeat of the 1990 death of collegiate star Hank Gathers, who died under similar circumstances. That will require Bosh and his representatives to offer a solid case to the league to back his claims of medical advancements.
[xyz-ihs snippet=”HN-300×250-TextnImage”]