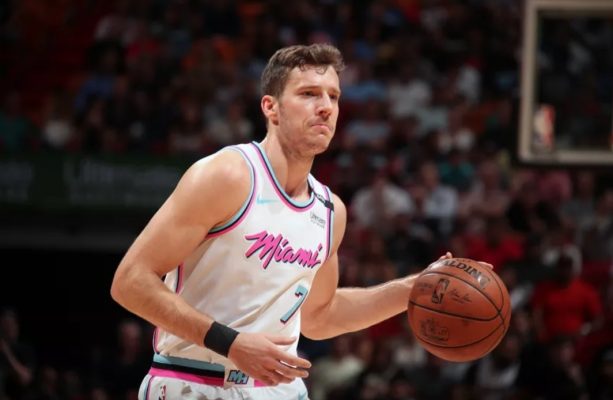 The status of veteran Miami Heat point guard Goran Dragic isn’t necessarily shaky, even if rumors have recently surfaced that the team might be looking to trade him. However, if any deal is eventually made, it seems clear that the Heat won’t be looking to dump his remaining salary and will be seeking for plenty in return.

The Sun Sentinel‘s Ira Winderman answered questions from fans on Monday, with the idea of Dragic being traded a specific subject where more insight was being sought. One Heat fan found it inexplicable that the Heat would even consider dealing the 32-year-old veteran, who’s largely considered to be the best player on the team.

Winderman agreed with the opinion about Dragic’s stature before then explaining how the Heat will approach that prospect:

“Correct, which is why there would have to be a significant return, starting with a potential lottery pick. That effectively would remove the incentive of dealing him to a contender (which such a pick to come no earlier than No. 15). Still, that is where Dwyane Wade could potentially help the Heat buy time. The reality is the Heat will not be able to recoup the two first-round picks they sent out for Goran, and at this stage, with most of the league capped out, the hope would have to be one quality pick and taking back a similar salary that expires after the coming season.”

Another fan asked Winderman about dealing Dragic back to the team they acquired him from back in February 2015, the Phoenix Suns. The reality of that scenario was then explained by Winderman:

“A move with the Suns might have made more sense when Phoenix still retained the Heat’s unprotected 2021 first-round pick (which since has been moved on to the 76ers). And it’s not as if the Suns still don’t need all the draft help they can get. Now, if the Suns were willing to give up one of their first-round picks over the next two drafts, that could be a starting point. But it also would mean the Heat essentially cashing out over the next two seasons, unless a cost-efficient replacement could be found at point guard.”

Dragic is due $37.3 million over the next two seasons, with a player option for the 2019-20 portion of his deal, something he’s expected to pick up. Last year, he averaged 17.3 points, 4.8 assists and 3.4 rebounds per game, numbers that would be virtually impossible to make up in the effort to acquire a current player. Getting a high draft pick or two would be also be nice, but it’s not terribly realistic and would turn the Heat into television viewers come playoff time instead of competitors for the near future.

In short, the concern over whether Dragic will still be with the Heat when the regular season begins next month seems a bit exaggerated at the present time.
[xyz-ihs snippet=”HN-300×250-TextnImage”]