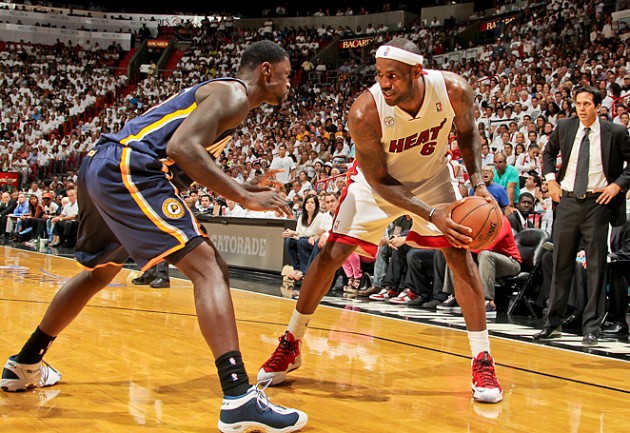 Former Indiana Pacers head coach Frank Vogel was the victim of LeBron James when the four-time MVP used to play for the Miami Heat.

Vogel, now the head coach of the Los Angeles Lakers, say he’s been been watching James’ past performances on the Heat to best determine the role that he will give his multitalented star. He was unsure at first how to utilize James, but the arrival of Anthony Davis in June gave him more clarity.

“After the Lakers acquired Anthony Davis and started to fill out the rest of the roster, Vogel began to embrace the idea of doing away with pretense and just putting the ball in James’ hands full-time,” wrote The Athletic’s Bill Oram. “Making LeBron the point guard would be a flashback to the way he would play in the postseason with the Heat, and later in those four trips to the Finals with the [Cleveland] Cavaliers.”

The Lakers coach said it was the Pacers-Heat playoff battles that gives him the assurance he needs to make James a primary playmaker for his new team.

“I went back and watched all of the offensive series for the six games that we played them that final year (in 2014),” Vogel said. “To look at different actions, but primarily to look at what volume were [Mario] Chalmers and Norris Cole and those guys handling the ball and what volume was he handling the ball. … (That) gave me confidence this is not something he’s unfamiliar with.”

That Heat team, which also featured All-Stars Dwyane Wade and Chris Bosh, went on to win two championships in the four years they were together. James left Miami to return to the Cavs in the summer of 2014 and went on to win another title in 2016.

Letting James dictate what happens offensively will purportedly free up the 46-year-old coach to focus on the other end of the court, where his Pacers teams used to have one of the best defenses in the league. But after a 112-102 loss to the Los Angeles Clippers on opening night, it looks like Vogel has a lot more work to do defensively to replicate his success with the Pacers.