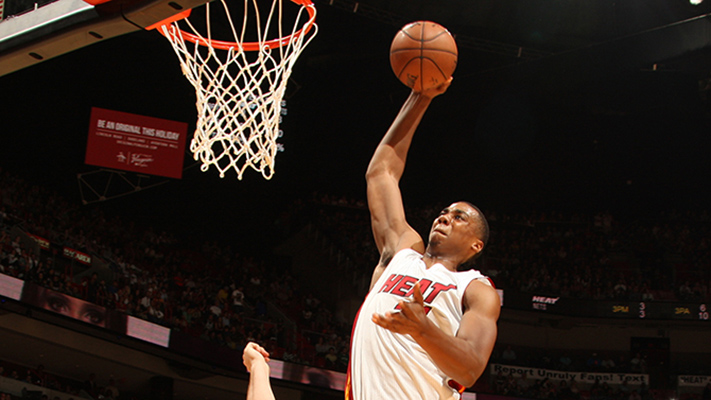 Hassan Whiteside is about to become a very rich man.

According to ESPN’s Amin Elhassan, a former Phoenix Suns executive, Whiteside is projected to earn an $18 million pay raise next season on a contract worth roughly $18.8 million. The Miami Heat center is due to earn just $981,000 for the upcoming season.

The 26-year-old is coming off of a season in which he ranked fourth in Most Improved Player of the Year voting despite playing in just 48 games. Whiteside was signed as a street free agent in November of last season before becoming entrenched as a starter in January.

He posted four games of at least 20 rebounds and even posted a triple-double in the Heat’s 96-84 victory over the Chicago Bulls on January 25th. He had 14 points, 13 rebounds and 12 blocks in the win.

Whiteside’s 26.26 player efficiency rating was the sixth-best in the league, ahead of the Cleveland Cavaliers’ LeBron James (26.01) and his own teammate, Dwyane Wade (21.44).

According to Ira Winderman of The Sun Sentinel, the Heat should have the requisite cap space to re-sign Whiteside, due to the projected jump of the salary cap for the 2016-17 season:

“Based on the projected jump of the salary cap for 2016-17 and the Heat’s current contract situation, the Heat should have the requisite cap space, even at such a substantial valuation, to retain Whiteside, should he choose to return, next summer.

At such a valuation, it would make it high unlikely, however, that the Heat also would be able to add an additional prime free agent if also retaining Chris Bosh, Goran Dragic and Dwyane Wade.”

When the 2016 offseason rolls around it should be interesting to see if Pat Riley opts to re-sign his young center, or if he signs a big-name free agent such as Dwight Howard, Kevin Durant or Al Horford.
[xyz-ihs snippet=”Responsive-Ad”]