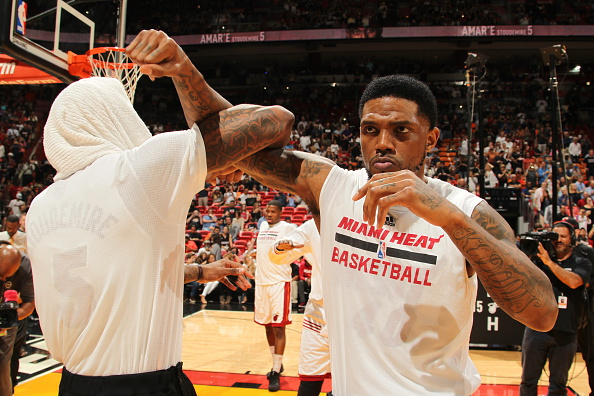 Most NBA veterans heading into their late 30s often have selfish motives such as having the perfect retirement or perhaps adding a couple more rings to their resume.

However, that’s not the case for Miami Heat forward Udonis Haslem.

The 36-year-old has experienced the franchise’s ups and downs over the course of his 13-year career; yet, even after being offered more money, multiple times, from other teams, and seeing his best teammates leave South Beach, Haslem reps the city he’s been faithful to his entire career.

As described by The Ringer’s Haley O’Shaughnessy, Haslem has made it a personal goal to take Whiteside under his wing as the two share some underlying similarities.

“Haslem’s biggest mentoring project is Heat center Hassan Whiteside, who in his two seasons in Miami has developed a reputation as a hothead. Last year, Whiteside was ejected for a nasty shove to the back of Kelly Olynyk’s head. Haslem promptly followed him into the locker room. The two have some parallels: Whiteside also spent time overseas, after not finding immediate success in the NBA on his first go-round after being drafted in 2010,” writes O’Shaughnessy.

Both players really had to start from the bottom. They weren’t high draft picks and certainly didn’t get the attention of top GMs at the beginning of their careers. Still, through hard work and dedication, they’ve created names for themselves and have reached immeasurable heights.

Haslem, the only undrafted player in NBA history to lead a franchise in rebounding, understands the discipline and work ethic a player needs to maintain to stay in the NBA. The forward has been with the Heat his whole career and will most likely retire here too.

From giving up money to accepting a reduced role on the team, Haslem has always given the Heat huge assists. Now, at the end of his career, he’s giving Miami another assist.
[xyz-ihs snippet=”Responsive-ImagenText”]