Don't Miss
Home / Media / Udonis Haslem: ‘We’ve Got as Good a Chance to Win the East as Anybody’

Udonis Haslem: ‘We’ve Got as Good a Chance to Win the East as Anybody’ 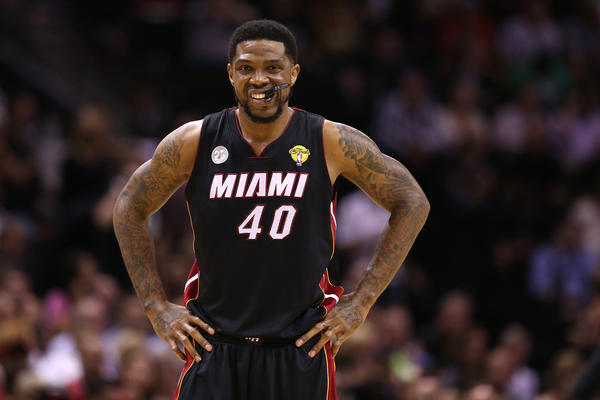 While the Miami Heat remain busy re-signing key players and revamping their bench, co-captain and three-time NBA champion Udonis Haslem continues to get ready for his 13th season with the team.

At a meet-and-greet with Heat fans at the 6th Annual Kids Week at the Southland Mall on Monday, Haslem and Hot Hot Hoops discussed his new teammates, his thoughts on longtime teammate Dwyane Wade returning to the team, and more areas of interest.

“I think Riles (team President Pat Riley) has done a great job,” said Haslem on Miami’s offseason so far. “If you’re going to put a championship-caliber team together, it has to start up top. I think they’ve done a great job of putting those kind of pieces together and putting us in the situation of making a run this year.”

Haslem’s been impressed with the moves the team continues to make and plans on spending plenty of time with his new teammates Amar’e Stoudemire, Gerald Green and rookie Justise Winslow as soon as possible.

“We’ll figure that out,” said Haslem. “Guys are still traveling; I know Dwyane is in China and CB is out West so we’ll make sure we have an opportunity to get everybody together before we go into the season. We’ll have an opportunity to just kind of kick it and get to know each other on another level outside of basketball. I think that you have to have a relationship off the court to put success on the court.”

In the case of Wade, the news of him returning to Miami made Haslem quite ecstatic to say the least.

“I didn’t really think much about it. There’s two sides to each story and the truth always lies somewhere in the middle,” said Haslem. “Obviously, I’m a huge, huge fan of Dwyane and he’s like my brother and this is an organization that’s meant the world to me so I was hoping it would all work out.”

With all this excitement for the upcoming season and all the talent across the board on the Heat roster, the veteran Haslem has all the confidence in the world in his Miami teammates to get to the 2016 NBA Finals.

“We’ve got as good a chance to win the East as anybody,” said Haslem on Monday.

Haslem, who just turned 35 at the beginning of June, is prepared to take on any role Heat head coach Erik Spoelstra gives him for the upcoming 2015-16 NBA season.

“I can play basketball so regardless of how much minutes I get or what coach decides to do as far as my situation, I’m going to be ready to play regardless,” said Haslem proudly. “That’s all I can do, just be ready to play. I can play the game. I proved that last year when Hassan Whiteside and Birdman went out. I came in a few games and had some double-doubles and was able to pull my weight and give us an opportunity to win a few games.”

“I can still play the game,” added Haslem. “Everything else is up to the coaches. I’m going to go out here and help these guys be as successful as possible, whether it be on the court playing or from the bench coaching.”

With the amount of young and veteran talent spread throughout the Heat roster, it’s hard to disagree with Haslem in regards to this Heat squad doing damage in the East next season in hopes of the franchise’s fourth NBA championship title.
[xyz-ihs snippet=”Responsive-Ad”]