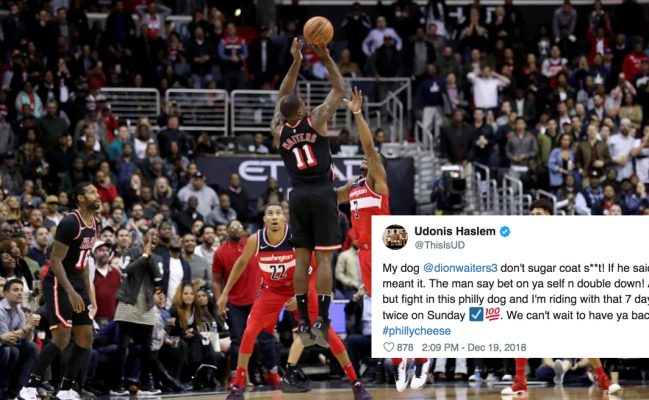 On Wednesday, Sports Illustrated released a large profile – written by Rohan Nadkarni – on Dion Waiters and his long, tough road back from ankle surgery.

The piece includes details on his rigorous rehabilitation process, some old-school training from Pat Riley, as well as his thoughts on what he can still bring to his team and the league.

“I know I’m better than a lot of these guys in the motherf—ing league,” Waiters remarked. “I only gave ya’ll a taste. I know I can do more.”

Those are strong words from the guard, who hasn’t checked in to an NBA game in nearly a year. Despite that, his brothers in Miami are backing him up, including veteran Udonis Haslem.

My dog @dionwaiters3 don't sugar coat s**t! If he said it then he meant it. The man say bet on ya self n double down! Ain't nothing but fight in this philly dog and I'm riding with that 7 days a week and twice on Sunday ☑️?. We can't wait to have ya back killa! #og #phillycheese pic.twitter.com/rQ03SWn8UM

Haslem’s social media support certainly backs up the sentiment spelled out in Sports Illustrated’s profile. Waiters has no plans to stop fighting until he’s back to 100 percent and playing at the same level as his phenomenal stretch in 2017.

The good news for the 27-year-old guard and the rest of the Heat is that he’s been cleared for full-contact practice. It’s a sign that he’ll be back on the court sooner rather than later.
[xyz-ihs snippet=”HN-300×250-TextnImage”]