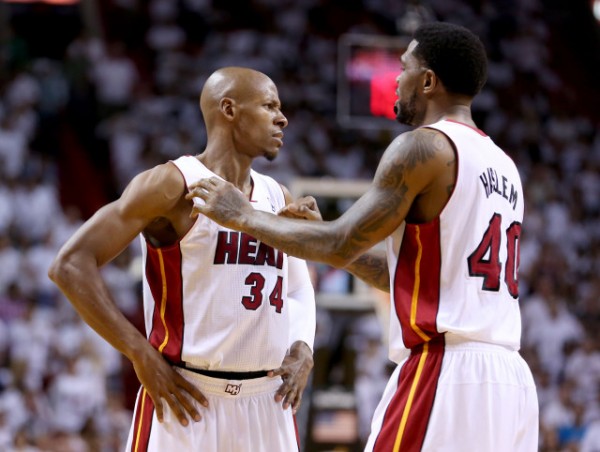 When Ray Allen signed with the Miami Heat as a free agent in 2012, it left some bitter feelings from the members of his previous team, the Boston Celtics. Those emotions were biting enough that Allen’s former Heat teammate, Udonis Haslem, came to his defense on Friday during a radio appearance on the Miami-based “Jose Rose Show.”

“I mean, they got to let that go. I think when you get to a point where you’re a free agent, you have the opportunity to make the best decision for you,” Haslem said. “Quality of life: Boston, Miami? Ahh, you guys can figure that one out. … I mean, and I understand, because at that time it was somewhat of a rivalry between us and Boston. But even when they had Ray we beat ’em. So it wasn’t like Ray came and helped us get over the edge.”

The bitterness stems from the 2012 Heat-Celtics playoff series that saw the Heat come back in the Eastern Conference Finals from a 3-2 deficit before then capturing the NBA title in five games over the Oklahoma City Thunder. The following year, Allen’s late heroics in Game 6 sparked Miami to win its second consecutive championship over the San Antonio Spurs.

“It’s not like the year before with Ray they beat us. Put it this way, it wasn’t the similar situation to maybe Kevin Durant going to the team that beat him. It was, you got your ass whooped with Ray, and we got Ray and we whooped your ass again.”

Technically, it was the New York Knicks that eliminated the Celtics in six games during the first round of the 2013 playoffs. However, Boston has only had limited playoff success since Allen’s departure.

It was during their talk that Allen’s controversial shift to the Heat, after they had knocked out the Celtics in the 2012 NBA playoffs, came up. Allen wasn’t included in this group for a specific reason:

“Everybody’s asking us, ‘Where’s Ray?’ People don’t understand that this is real life for us. The situation with Ray is very sensitive. I think that when we all talked about doing this reunion tour, we were talking about guys who we consider loyal and part of this group,” Garnett said. “Just being honest, my two cents, when Ray decided to go to the Heat, I felt like he moved on. And he went to pursue another ring, he got another ring, shouts to him. And that’s it. There was no other (Washington) Wizards, it wasn’t no other (San Antonio) Spurs, it wasn’t no other Heat. It was all Celtics invited to this.”

While Allen may not be welcome at any future get-together involving the Celtics, that’s not likely to be the case should any Heat championship reunion take place. He ended his likely Hall of Fame career with Miami following the 2013-14 season.
[xyz-ihs snippet=”Responsive-ImagenText”]