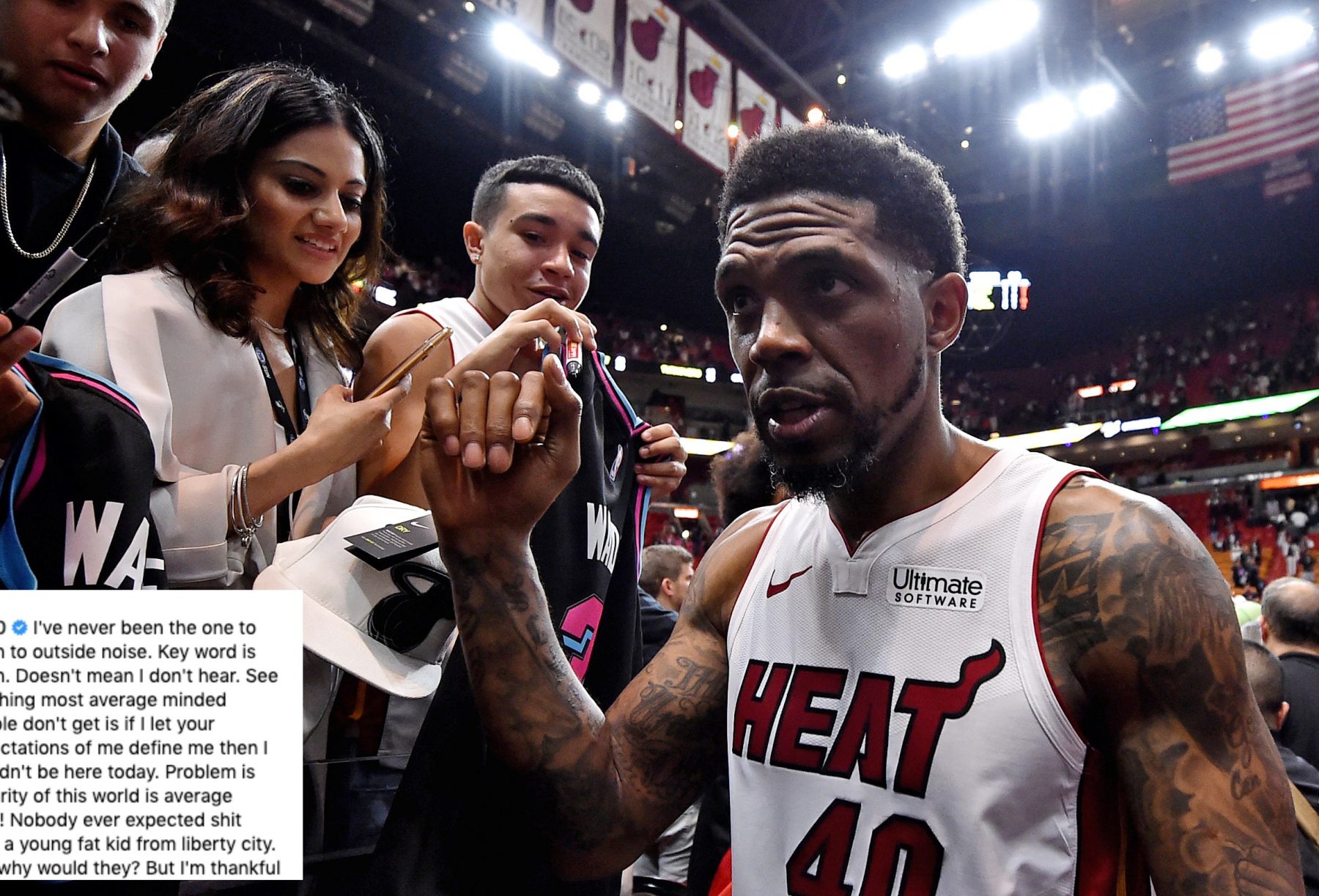 Miami Heat forward Udonis Haslem has yet to announce whether or not he’ll return for what would be his 17th season with the team.

While he takes his time to ponder the prospect of retirement, he took to social media to ask that his fans and critics alike allow him to make the decision on his own. He also passionately spoke about overcoming obstacles throughout his life and basketball career.

I've never been the one to listen to outside noise. Key word is listen. Doesn't mean I don't hear. See the thing most average minded people don't get is if I let your expectations of me define me then I wouldn't be here today. Problem is majority of this world is average ASF!! Nobody ever expected shit from a young fat kid from liberty city. Hell why would they? But I'm thankful they didn't. I guess I shouldn't own Subways, and Einstein, and Auntie Ann's, and Starbucks, and 800 Degrees Woodfire kitchens either huh? What I've grown to realize in my life is that my obsession with success, my drive to overcome obstacles, and my overall work ethics is way higher than most. And I'm ok with that. It makes sense why most think I should retire at 39. Cause most would. Cause most are average minded. Most don't look like this at 39! Hell they ain't look like this at 19. Lol. So y'all keep worrying about the last spot on the roster while I sit back and stay ready so I don't gotta get ready. I'm not saying I'm playing next year but if u with me then u will support whatever I do!! Not tell me what to do!! And if that ain't good enough for u, in the words of Barbara Wooten f**k ya!! U was never wit me anyway!! Oh and one more thing. You out your ? ass mind if you think I can't still play this game. I'll sleepwalk into a double double cause I'm just built different!! Y'all should know that by now but keep hating. I need y'all!! A chain is only as strong as its weakest link and if I'm the weak link that's a hell of a f**king chain!! ✌?️☑️? #og

The Heat organization would like to see the popular veteran suit up for another year, but is not pressuring Haslem in any way. In recent years, his contributions have largely been as more of a clubhouse presence and role model for younger teammates, rather than an on-court presence.

Haslem turned 39 years old earlier this month and holds a special place in the hearts of Heat fans, primarily because he’s a Miami native.

Signing with the Heat in 2003 as an undrafted free agent out of the University of Florida, he crafted a career with modest statistical averages of 7.6 points and 6.7 rebounds per game. Along the way, he’s been a part of all three of the Heat’s NBA titles.

Having watched former teammate Dwyane Wade go out with a great deal of fanfare this past season, Haslem has indicated that if he does return, he’d like to have a similar sendoff.

While other teams may not be quite as enthusiastic about that prospect as they were about Wade’s farewell tour, the Heat will certainly take the time to hold a night in Haslem’s honor. The only question now is whether it comes following another season of play for the veteran.
[xyz-ihs snippet=”HN-300×250-TextnImage”]