Udonis Haslem Says 2016-17 Heat Team Amongst His Favorites, Wishes to Return Next Season 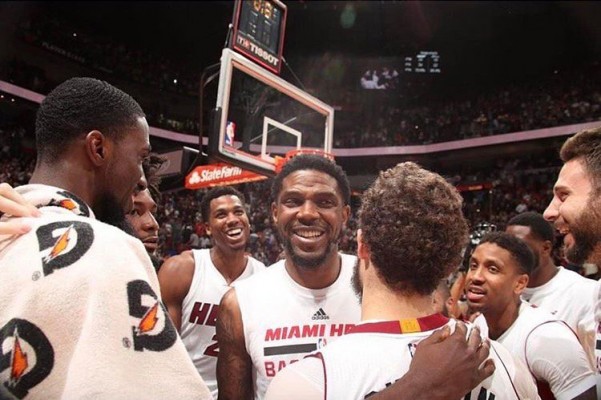 Udonis Haslem is the definition of what Miami Heat president Pat Riley calls a “Heat Lifer.” He’s played in Miami for 14 years, making him the Heat’s longest-tenured player by far.

In fact, his stint in Miami is the fourth-longest amongst active players who’ve spent their entire career with the same team. Only Tony Parker, Manu Ginobli and Dirk Nowitzki have been with their respective ball clubs for longer.

Over the past decade and a half, Haslem never really put up gaudy numbers on the court. However, he’s been a Heat team captain since 2007 and has truly seen it all.

“I’ve got 770 and something games under my belt,” Haslem said back in October. “I’ve played with some of the greatest players in the NBA.”

More notable is the fact that “UD” has collected three championship rings over the course of his storied career. Still, despite the Miami native’s past successes, Haslem claims this 2016-17 season has been one of his all-time favorites:

“This has probably been one of the more enjoyable rides for me,” a somewhat wistful Haslem said after Miami was bounced from playoff contention on Wednesday. “I’ve been on some championship teams but, for me, this is probably the most fun team I’ve had the opportunity to play on.”

That sure means a lot coming from a guy who’s played on some of the greatest teams in NBA history. The 6-foot-10 enforcer played a significant role on those “Big Three” teams that made four straight Finals appearances, won back-to-back titles and went on a historic 27-game win streak halfway through it all.

Even before that, UD witnessed (and helped facilitate) the meteoric emergence of Dwyane Wade back in 2005-06, when he became the second-youngest Finals MVP in NBA history. And like he said, he’s payed with some of the top basketball talents of all-time including: Wade, LeBron James, Shaquille O’Neal, and Alonzo Mourning.

Still, 2016-17 was special in its own right. To prove it, after the team’s season came to an abrupt end on Wednesday, Haslem was asked by a reporter if he’s ever been around a group of guys that have “loved each other more” than this one:

“Probably not, man,” Haslem replied. “We loved each other with the ‘Big Three,’ don’t get me wrong, we loved each other through the championship run. I’ve created bonds with those guys that will never be broken, but I think towards the end of that run, you know, we forgot to have fun, and I think this group never forgot to have fun, no matter what was going on around us.”

He also posted this heartfelt message to Twitter on Thursday:

In 14 years,I thought I'd seen it all.This @MiamiHEAT team was truly special & made me a better man. Thx to my little brothers #HEATNation pic.twitter.com/a2E0cY4VZ8

Luckily for Miami, Haslem wishes to return to the Heat for at least one more season in 2017-18.

If that happens, there’s little doubt the Heat Lifer will once again be selected team captain.
[xyz-ihs snippet=”Responsive-ImagenText”]