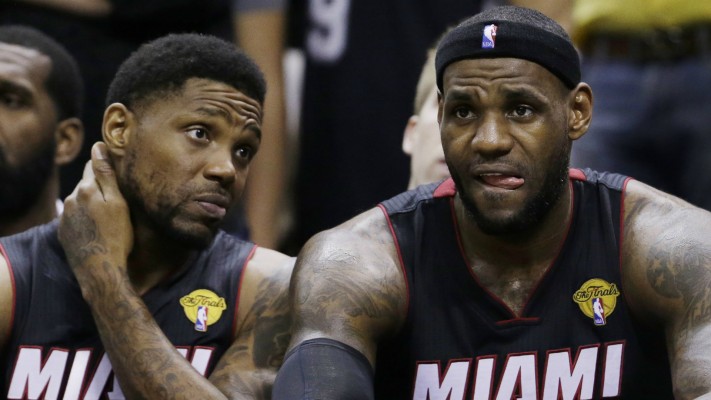 Mr. 305 might be the most intimidating athlete in South Florida both on and off the court. But don’t let the ruggedness and physicality fool you.

Udonis Haslem has always been a compassionate person off the court as he has been known to give back to the community time and time again. He is also known throughout the NBA as one of the most loyal teammates a player can have.

On Thursday, Haslem was helping out at a local Miami Heat basketball camp at South Broward High School when he told reporters he was rooting for the Cleveland Cavaliers in these hotly contested NBA Finals.

According to a report by Manny Navarro of the Miami Herald, Haslem made it clear that he is rooting for his friends LeBron James and James Jones to win the NBA Finals this year.

“I would love to see those guys get a ring. If they lose, it’s no sweat off my back. But if they win — obviously with the relationship I have with them [James and Jones] — I’d be very happy for them,” said Haslem as he signed autographs.

It seems that the Heat’s 13-year veteran doesn’t hold grudges. James taking his talents away from South Beach and back to Cleveland still stings a large portion of the Heat fan base, but Haslem seems to have moved on just fine.

In fact, he’s already looking ahead to next season. Haslem, who played through the pain of a torn plantar fascia during the playoffs, says he will be fully healed in about a month and a half. And don’t get any ideas about sending him into an early retirement, Haslem has stated many times that he still feels he can contribute 15 to 20 minutes anywhere in the rotation for the Heat.

“I know for sure I’ve got two years in me,” Haslem said. “I gave solid minutes, played well. This year we were in the playoffs — Game 6 in Charlotte. I can be ready in those type of situations for a couple years.”

Even if Haslem isn’t a regular part of the rotation during the tail-end of his career, he will always be a part of the team’s success as a veteran co-captain on and off the court.

Pat Riley reiterated during exit interviews last month that the Florida native is a Heat Lifer, so it’s probably safe to say Heat fans don’t have anything to worry about; Udonis Haslem will still be wearing No. 40 and motivating his teammates with NSFW halftime speeches come next fall.
[xyz-ihs snippet=”Responsive-Ad”]