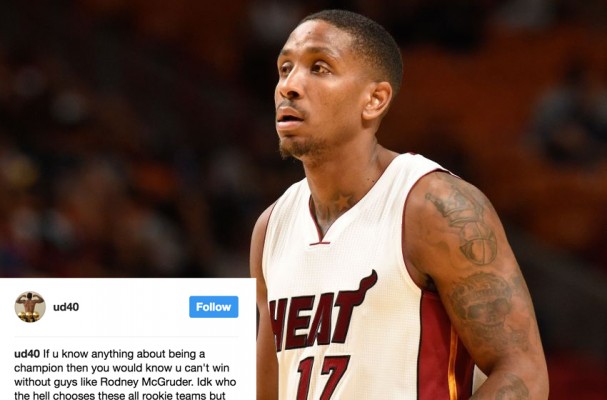 The collective snub given to the Miami Heat concerning postseason awards that were announced on Monday didn’t go unnoticed by veteran Udonis Haslem, who specifically focused on the omission of teammate Rodney McGruder from the league’s two All-Rookie squads. He took to social media to offer his biting remarks about leaving McGruder off both teams.

If u know anything about being a champion then you would know u can’t win without guys like Rodney McGruder. Idk who the hell chooses these all rookie teams but I’ll be damned if he wasn’t one of the best rookie stories of the year. Just another reason to stay hungry and keep that underdog mentality like I told you bra. Stay prayed up and get what u deserve next season!!!! #underdog #og #dontTuneJJassup???

McGruder garnered seven first-place votes, but came up two points short of making the second team. The vote was announced at approximately the same time as news of the Heat’s Hassan Whiteside being left off the NBA’s All-Defensive units, which made the day doubly disappointing for the team’s fans.

The 25-year-old McGruder had been signed to a multi-year free agent contract by Miami last July and proceeded to play in 78 games, making 65 starts along the way. In those contests, the 6-foot-4 shooting guard averaged 6.4 points, 3.3 rebounds and 1.6 assists while playing 25.2 minutes per game.

Instead of choosing McGruder for either of the squads selected, voters chose Sacramento Kings guard Buddy Hield and the Milwaukee Bucks Malcolm Brogdon for the first team guard slots, while second team honors at guard were given to Denver Nuggets guard Jamal Murray and the Brooklyn Nets’ Yogi Ferrell, who finished just ahead of McGruder in the balloting.
[xyz-ihs snippet=”Responsive-ImagenText”]