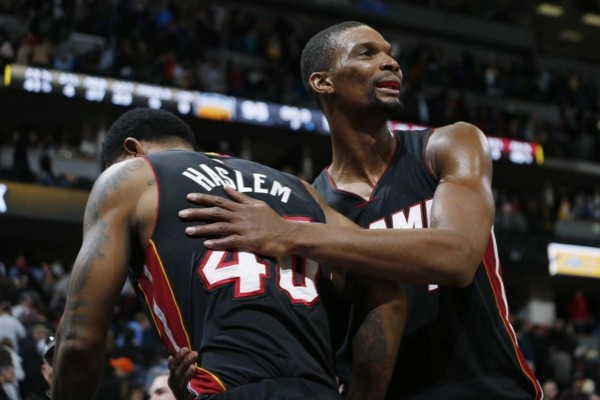 Now Bosh appears to be full healthy and ready to return to the Miami Heat once training camp begins. According to Ira Winderman of the Sun Sentinel, Bosh’s teammate Udonis Haslem says Bosh is in very good spirits:

Bosh is currently the highest paid player on the Heat and has three years with about $75 million remaining on his contract. Though he hasn’t been able to prove his worth in the latter parts of the last two seasons, he is now blood-clot free and hopes to resume his role as the team’s most versatile player moving forward.

As for Haslem’s situation, the 6’8″ power forward is not signed with the team through next season, but reportedly wants to play at least two more years and will likely take a minimum contract with the Heat to do so. That is not a guarantee, but Haslem is the team’s longest tenured player, along with teammate Dwyane Wade, and has made a life in Miami as a fan favorite and community leader. Chances are, the two sides will work to get a deal done together in the offseason.

Here’s to hoping that both guys are back on the court and in Heat uniforms next season. Naturally, Bosh’s health takes precedence and is of the utmost importance, but it’s clear that Bosh does not plan on ending his career any time soon as he hopes to prove to the world that he can stay healthy enough to be a major contributor in Miami.
[xyz-ihs snippet=”Responsive-Ad”]