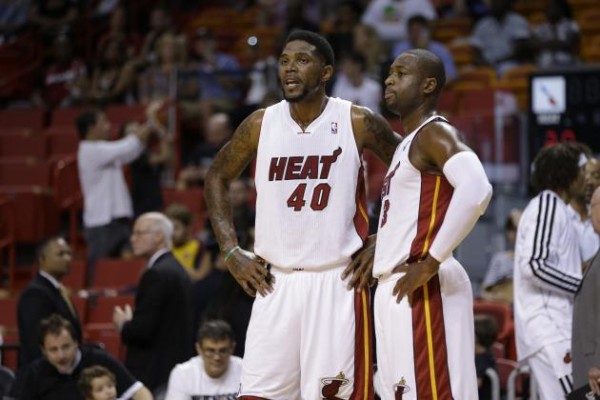 It’s no secret that Miami Heat captain Udonis Haslem wants to see his former teammate and lifelong friend Dwyane Wade back in a Heat uniform when it’s all said and done.

On Saturday, Haslem reiterated his desire to see Wade back in Miami, a city where the All-Star shooting guard spent the first 13 years of his career.

“I would love to have him back, everybody knows that,” Haslem said. “Not only is he a great competitor, great teammate I learned a lot from but also a friend of mine, I consider him a brother.

“I just want Dwyane to be happy. This is the last lap for us both. We deserve to finish it the right way. Whatever makes him happy finishing his career. … hopefully it’s in Miami. I would love for it to be Miami. I want him to finish it right and have no regrets.”

Wade exercised the option in his contract this summer for $23.8 million, but many are speculating that the 35-year-old will be bought out by the Chicago Bulls, allowing him to sign with whichever team he chooses.

The Heat currently have a $4.3 million exception and president Pat Riley has stated that the team is reserving it just in case “something pops up.”

“We talked about finishing our careers together,” Haslem said about Wade. “We really want it to be the case. Plans change. So if it doesn’t happen it doesn’t put any strain on our relationship but it’s still a goal of mine. Hopefully we can end it that way.”

If Wade is indeed to be bought out, there are two teams that are rumored to be on his radar: Miami and Cleveland.
[xyz-ihs snippet=”Responsive-ImagenText”]