Don't Miss
Home / Media / Tyler Johnson on Recent $50 Million Contract: ‘They Got Me for a Steal’

Tyler Johnson on Recent $50 Million Contract: ‘They Got Me for a Steal’ 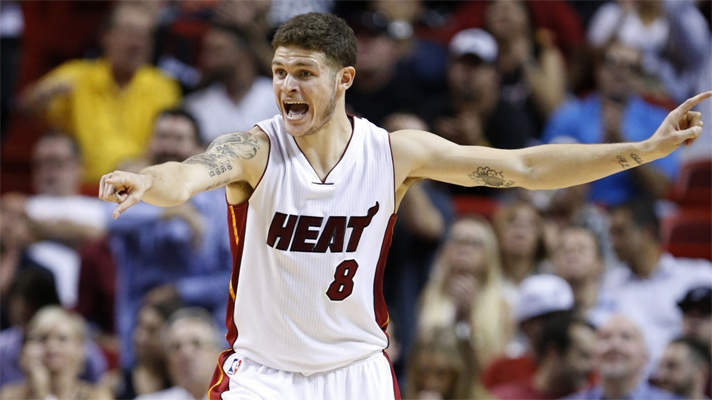 Tyler Johnson just got paid — a lot. For a player who was in the D-League two years ago, signing a $50 million contract is the deal of a lifetime. Now comes the hard part: earning that money.

Johnson’s season was cut short last year due to a shoulder injury. It was that misfortune that led to the discovery of Josh Richardson, but not before Johnson had carved out a role in Erik Spoelstra‘s rotation.

“He just makes you play him,” Spoelstra said.

As free agency began, Johnson began to take meetings with potential suitors in Chicago and the Brooklyn Nets made him the extravagant offer of $50 million over four years. Johnson admits that he was conflicted with the decision upon him, because of the relationships he had built in his time with the Heat.

“I was trying to do what was best for my family, but at the same time you have to consider the relationships that you’ve built, what it’s taken for me to get here, and people I’ve gotten here with. So it was a lot of mixed emotions,” Johnson told Heat.com’s Couper Moorhead.

Keeping his family in mind, Johnson signed the offer sheet with Brooklyn. However, he hoped that the Heat would offer him the same deal and he could continue to build his career with the organization.

Those battles included beating the timetable of his recovery from surgery to return in the second round of the playoffs against the Toronto Raptors. He says he wasn’t even close to 100 percent but did not want to miss out on a valuable learning experience.

“We had an opportunity to make the playoffs,” Johnson said. “I think that we can use that experience and grow from it. Not a lot of times you get to come to an organization where winning is above all else and you’re put in an opportunity to be successful.”

The organization clearly has a mutual appreciation for Johnson’s play and work ethic. Not only did they match Brooklyn’s offer sheet, but Pat Riley lauded Mickey Arison’s decision to retain Johnson at his press conference last week.

“…tell us we’re going to poach one of your guys. Micky said, ‘You’re not poaching any of my guys.’ Micky made the decision. He loves Tyler. He’s a young piece. He’s part of our future. We will deal with years 3 and 4. Years 1 and 2, we got him as a bargain,” said Riley.

“I’m excited to be able to get back to that and show people that not only do I deserve it but in a couple of years they’re going to say they got me for a steal,” said Johnson.

Being a steal at $50 million dollars is a pretty high bar to set for yourself, but Johnson isn’t stepping back from the challenge. Once he’s done training in Las Vegas, he plans to return to Miami to pick up right where he left off. He’ll begin to focus on getting 100 percent healthy for training camp and producing in the inevitably larger role that will be asked of him this upcoming season.

There is no doubt if Johnson keeps growing he has a bright future with the Heat.
[xyz-ihs snippet=”Responsive-ImagenText”]

Featuredfree agencymiami heatNews Tickertyler johnson
← Previous Story Pat Riley on Bringing Dwyane Wade Back: ‘I Should Have Tried To Do Everything’
Next Story → Why Willie Reed Took Less Money to Sign with the Miami Heat