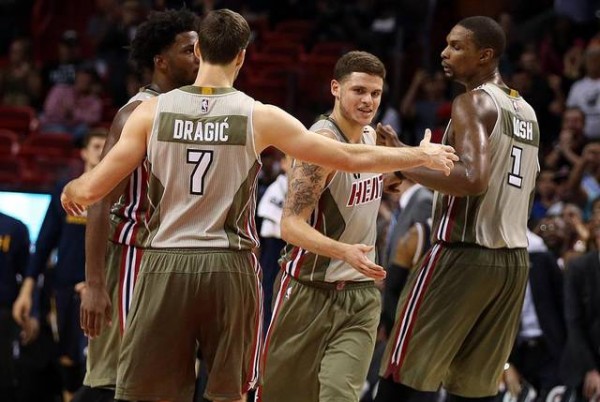 If the confidence of Miami Heat guard Tyler Johnson is of any indication, his teammate Chris Bosh will be back with the team when they open up training camp late next month, even though the Heat haven’t cleared the forward to play.

Johnson spoke with Ira Winderman of the Sun Sentinel and mentioned that he’d chatted a number of times with Bosh, who’s been staying in California over the summer.

“Me and him have been going back and forth,” Johnson said. “He’s been kind of talking to me about what he needs to see out of me this year, how my role’s going to grow.”

That encouragement was based on their unique bond of having both been out of the Heat lineup for much of the time after the All-Star break. Unlike Bosh, Johnson was able to get back from his shoulder surgery in time for the playoffs.

“He was sitting out the same amount of time I was. I remember he was eager to get back last year,” said Johnson. “So we had those talks a lot last year. So I can only assume that he’s kind of itching to get back and play in actual games.”

Johnson has an equal amount of confidence when it comes to the team’s chances this season. Key losses like Dwyane Wade and Luol Deng and the inability to nab the big free-agency fish in Kevin Durant have reshaped the Heat’s roster.

“We had a lot of veterans who had a lot of playoff experience, guys who had won multiple championships on the team,” Johnson said. “So, yeah, it’s definitely a big-time turnover in that aspect. But you can’t really doubt people who come in the gym to get better every day. So I think we’re going to have to change our playing style just a little bit from where we were last year. But I’m excited for it.”

Johnson compared the recent changes to his days in the D-League.

“I went from college to the D-League to back up to the NBA, and then there was a huge turnover on the team last year. So I’m kind of used to seeing new faces,” Johnson said. “But I think that’s why this time it’s so important to be in the gym with them to kind of get a little bit of continuity, just a little bit of chemistry going before the season starts and before we get into training camp.”