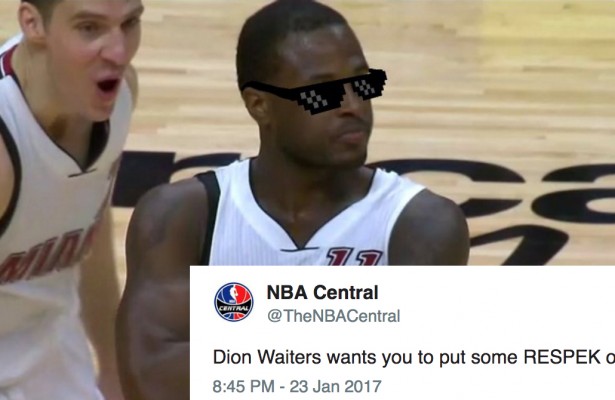 The Miami Heat upset the Golden State Warriors 105-102 Monday night after Dion Waiters hit a game-winning 3-pointer with less than a second left. Waiters dropped 33 points on the league’s top-ranked team and went 6-of-8 from beyond the arc.

The 3-point dagger was the icing on the cake and Waiters celebrated the game-winner as only he could, with supreme confidence.

May I ever believe in myself about anything as much as Dion Waiters believes in himself about everything pic.twitter.com/LayaSuVgtD

Since then, the internet has responded, and some of the results are flat-out hilarious.

Your new NBA logo, with apologies to Jerry West pic.twitter.com/ddI3kRQ7lb

My reaction when I open my freezer and I'm out of @Totinos pizza rolls. pic.twitter.com/OcP4NBvLGB

Dion Waiters wants you to put some RESPEK on his name pic.twitter.com/p7ag49Ulm7

When you hit STOP on the microwave right before it hits zero pic.twitter.com/LXRZzualHM

put this on a T-shirt pic.twitter.com/NDnw7GJh9Y

Even the Heat’s official twitter account got in on the fun, by promptly updating their profile picture.

The Heat's new profile picture is a friggin A+++++ pic.twitter.com/wC9frAJTMF