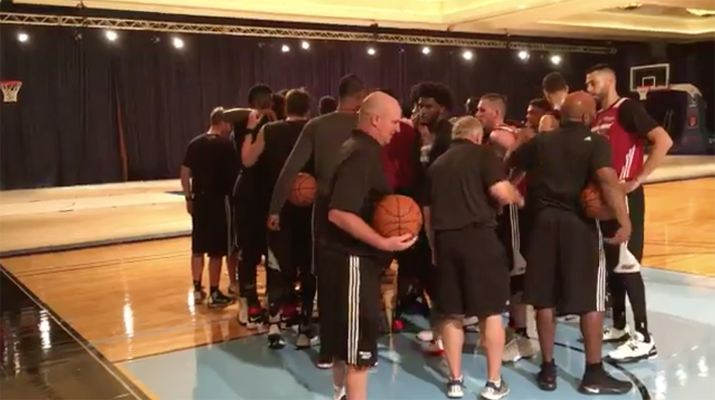 The Miami Heat held the first of its two daily practice sessions at the Atlantis, Paradise Island resort in the Bahamas this morning. Just a day after Pat Riley told the media that Chris Bosh‘s playing career with the Heat had come to an end, head coach Erik Spoelstra turned his focus to preparing the remaining 19 players for the season.

He was pleased that most of the team showed up to camp in shape and ready to go. He noted that the first practice was defense-oriented.

“They guys were ready to get to work,” said Spoelstra. “It allowed us to have a work practice like this. Guys came in extremely conditioned well. So we were able to get into full contact in the first practice.

There were some notable Heat players who were not available for practice including Josh Richardson and Josh McRoberts.

Richardson, who is still recovering from a sprained MCL suffered a couple weeks ago, was able to take off his new brace for the first time on Friday. According to multiple reports he was working the stationary bike, while his teammates competed on the court. This is a good sign for the University of Tennessee graduate who is aiming for a return soon after the season begins.

On the other hand, McRoberts’ latest injury must sound like a broken record for most Heat fans. Spoelstra told reporters that the 6’11” big man sustained a right ankle and foot injury five weeks ago. He described the injury as minor.

This the latest setback in McRoberts’ injury-riddled two-year tenure with the Heat. He has played in 59 games in that span due to knee and back injuries.

With so many new faces on the Heat roster, Udonis Haslem has taken an initiative as the last member of the Big 3 era to challenge and lead this team. For years Haslem has been the locker-room motivator and sideline enthusiast that players on the court can count on. Now he’s sharing those same motivations with this young team. Here’s what he had to say to Anthony Chiang from the Palm Beach Post.

“I looked at all the guys around the room and I looked at everybody’s situation and it just reminded me of myself 14 years ago,” Haslem said. “Guys that people probably thought weren’t good enough or guys that probably bounced around a little bit and really didn’t find a home and they have an opportunity here.

“My thing to the guys was that 14 years ago, I felt the same way you guys felt. I felt counted out and I felt neglected. I felt like people didn’t think I was good enough to help their team win. So when I sat in that chair 14 years ago, I wanted everything. I wanted the rings, I wanted respect, I wanted to prove people wrong, I wanted to take care of my family. So my message to the guys last night was that this is your opportunity. Don’t settle. Go get everything, go get it all. Get your career, get your rings, take care of your family, set your legacy up. Don’t just come here and try to make the team and try to be a part of the team. Go for everything, man.”

Some wise wisdom from Mr. 305 might just be what this Heat team needs as it prepares for the season ahead.
[xyz-ihs snippet=”Responsive-ImagenText”]