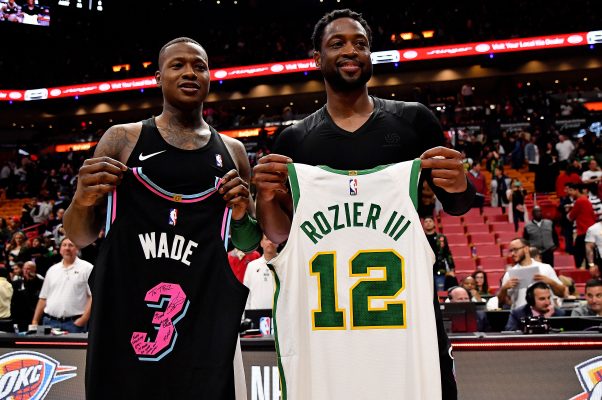 As part of his farewell tour, Miami Heat guard Dwyane Wade has been exchanging jerseys with opponents night in and night out.

Following the Heat’s win on Thursday night over the Boston Celtics, Wade swapped jerseys with Terry Rozier, who said after the game that he wasn’t going to let any other player get Wade’s jersey.

“I just never thought I’d see this day, witnessing his one last dance and actually playing against him,” said Rozier. “It was mandatory I got his jersey. I wouldn’t let nobody else get it.”

Rozier also spoke about the relationship he and Wade have formed over the last couple of seasons.

“We became good friends over the last couple of years,” said Rozier. “He’d text me right before the season starts and wish me good luck before the season, and I told him when this day comes, when we play them today, ‘I need that jersey.'”

The 24-year-old University of Louisville product, who is averaging 8.8 points, 4.0 rebounds and 2.8 assists per game this season, mentioned that Wade was his favorite player growing up. When asked what he was going to do with the jersey, Rozier had a clear idea.

“Wear it, frame it, everything. Just don’t let it go,” said Rozier.

It’s been amazing to see how players from every single team have pined after Wade’s jersey and how they appreciate the incredible career Wade has had.

The Heat and Celtics will face off three more times during the regular season. Two of those games, on Jan. 21 and April 1, will take place in Boston. The remaining game, on April 3, will take place in Miami, and will mark Wade’s second-to-last regular-season game in Miami.
[xyz-ihs snippet=”HN-300×250-TextnImage”]