Stephen A. Smith: Kevin Durant Should Sign With Miami Heat 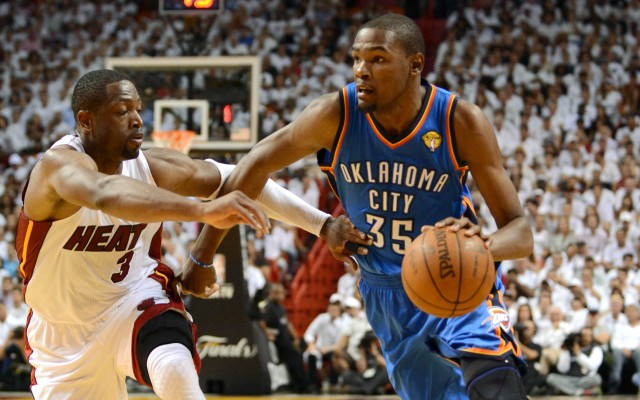 The ultimate destination of pending free agent Kevin Durant is still unknown, but according to ESPN’s Stephen A. Smith, he should jump on the chance to join the Miami Heat in the summer of 2016.

Smith’s comment, which he made on Monday morning’s edition of the ESPN program, “First Take,” were noted in a tweet by the network’s Jorge Sedano:

Rumors of such an event taking place have swirled for much of the past year, with the Heat having structured their payroll to accommodate what’s expected to be a max deal for Durant.

At present, only Chris Bosh and Goran Dragic have long-term deals. The quartet of Dwyane Wade, Hassan Whiteside, Luol Deng and Joe Johnson will all be free agents, with a potential Durant signing effectively taking up a good portion of the payroll.

However, a huge jump in the salary cap will allow for at least some of the free agents to be re-signed.
[xyz-ihs snippet=”Responsive-Ad”]