Don't Miss
Home / Media / Erik Spoelstra on Tyler Johnson: ‘He’s a Force of Nature out There’

Erik Spoelstra on Tyler Johnson: ‘He’s a Force of Nature out There’ 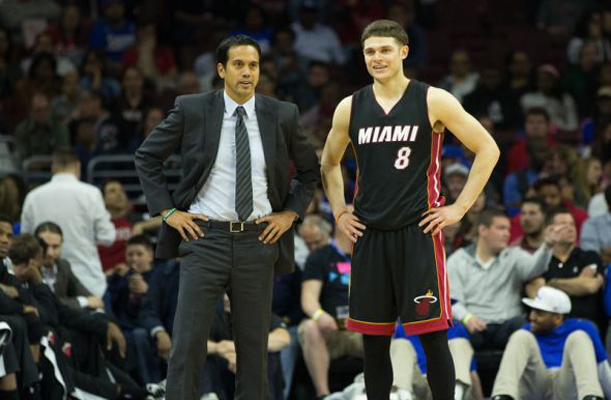 First, Tyler Johnson made the Miami Heat play him. Then, he made them pay him.

“He makes you watch him,” Heat head coach Erik Spoelstra said recently in a video on the team’s website. “He makes you play him. He makes you re-sign him. He’s a force of nature out there. He doesn’t do everything perfectly by the script, and that’s what I love about Tyler. He’s an ultimate competitor. He finds a way.”

Johnson rose through the ranks of the D-League and eventually earned a spot in Spoelstra’s rotation by impressing the coach with his work ethic and play on the court. After much deliberation this summer, the Heat front office decided to match an offer sheet that allowed Johnson to stay in Miami on a backloaded four-year, $50 million contract.

In a video posted on the team’s website, Spoelstra reaffirmed his belief that Johnson is one of the hardest working members on the Heat roster. Even though he probably won’t make the starting lineup, Johnson is sure to be key rotation player, just like he was before he injured his shoulder last season.

“He’s got an incredible work ethic. I think that’s why the Heat fan base loves Tyler so much, and they should,” said Spoelstra. “He’s reflective of the work ethic of this community. He puts in the time. And he’s tireless with his work ethic. He’s coachable. He has a great desire to get better. And he’s turned himself into a heck of a pro.”

The brand new contract puts pressure on the Fresno State University product to produce results to justify his huge payday, but his coach doesn’t think that will limit his growth.

“And, again, with Tyler, I’m not going to put a ceiling on him,” Spoelstra said. “Because of his competitiveness, and because of his work ethic, his commitment to want to be great, who knows where he can be this year?”

In Johnson’s case, the play has always justified the praise, and with the loss of key veterans this offseason, his performance will be thrust into the spotlight. Coming off the bench, he will have to be the focus of the defense in the second unit which will be a completely new challenge.
[xyz-ihs snippet=”Responsive-ImagenText”]