Rodney McGruder Says Heat Continue to Show Up to Work: ‘Everybody’s Been in’ 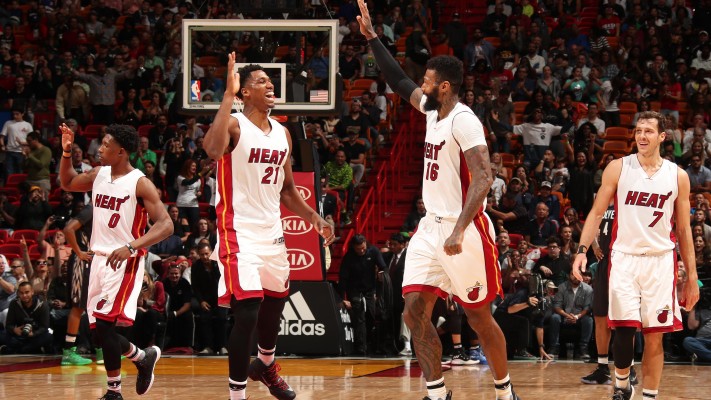 With the amount of activity going on at AmericanAirlines Arena, you’d think that the Miami Heat were competing in this year’s playoffs.

Clearly they aren’t, as they just missed this year’s postseason due to a tiebreaker, but that has not stopped players from last year’s squad from holding workouts and training sessions on the practice courts and in weight rooms. These workouts haven’t been required by the team and even include 14-year Heat veteran Udonis Haslem.

“This is the first time I’ve been in the arena this early in the offseason in a long time,” Haslem told Ira Winderman of the Sun Sentinel, “We make sure we put time aside to spend time with each other. And we still make sure that we continue to strengthen that bond.”

That bond the Heat’s captain speaks of has even taken the form of group spinning classes. Hassan Whiteside was alongside Wayne Ellington, James Johnson, Rodney McGruder and others while showing off his newest cycling crew on Snapchat.

These impromptu sessions have included impending free agents like Johnson, Ellington, Dion Waiters and Willie Reed, most of whom will sign large contracts this offseason. Clearly, the chemistry of this group has manifested in many ways on, and now off, the court.

“It’s special,” Reed said. “That just speaks volumes to the team we had this year. We have guys that want to work. And when have guys like that, it doesn’t matter what time of the year it is; you want to get better at working on your craft, because you want to be able to provide for the team in the upcoming season.

“I love seeing those guys out there. I love going up there and working out, and seeing guys working on their game. It’s been really inspiring to me. So it helps you when you’re working out, as well.”

And while these practice sessions are held close to Heat head coach Erik Spoelstra and Heat president Pat Riley‘s offices in proximity, neither of them have been attending the workouts. As a result, having the gym filled this early in the offseason is a surprise to the Heat support staff as well.

“I asked the (support) guys,” McGruder said. “They said this is the first time that this many people have stayed. They said, ‘We really haven’t seen this many people around.’ So that just goes to show a work ethic that these guys are trying to put in themselves.

“You’ve got guys like U.D. coming into the gym that’s a 14-year vet, so guys are just preparing differently. Wayne is in here working hard. James, Tyler [Johnson], Dion’s in here. It’s everybody. Willie. Okaro [White]. Everybody’s been in the gym.

This bond, however, could all be for naught, depending on how many players the Heat front office decide to bring back next season. For the time being, these workouts are a solid testament to how this tightly knit group has bought into the Heat’s culture.
[xyz-ihs snippet=”Responsive-ImagenText”]