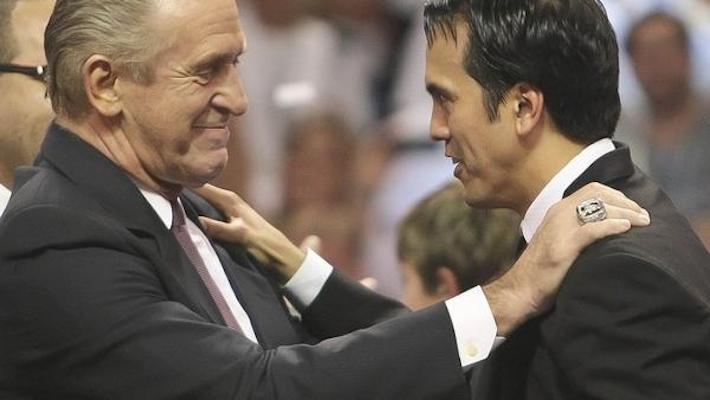 In that time, he has a career winning percentage of 59.3 percent and has led the Heat to two NBA titles.

However, before he became one of the most respected coaches in the NBA, Spoelstra first worked in the Heat’s video room and as an assistant coach.

As crazy as it may sound, when he was promoted to assistant coach, Spoelstra didn’t even have a suit to wear on the bench.

“When the Miami Heat promoted Erik Spoelstra out of the video room and into an assistant coaching position, there was one problem: Spoelstra owned no suits,” ESPN’s Zach Lowe wrote. “The league’s dress code for coaches, codified in a memo sent before the season, mandates every coach wear a dress shirt (or ‘dress sweater’) and sport coat.

“Pat Riley, Spoelstra’s boss and one of the all-time sports fashion plates, lent Spoelstra several of his Armani suits. Riley is taller than Spoelstra, with broader shoulders. ‘Pat’s suits were huge,’ Spoelstra said. ‘It was almost like they had football pads in the shoulders. I looked like the dude from the Talking Heads video.’”

Now, Spoelstra is in his 12th season as the head coach of the Heat and is looking to lead them deep into the playoffs.

Miami is currently the No. 4 seed in the Eastern Conference with six regular season games remaining.

The Heat are 1-1 since the NBA resumed its season in the Orlando, Fla. bubble.

Spoelstra and Miami will have a chance to improve upon that record on Tuesday night, as they take on the Boston Celtics at 6:30 p.m. EST.