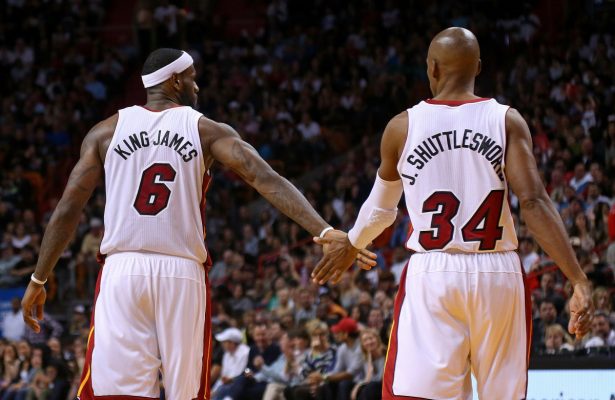 One of four-time MVP LeBron James’ rare jerseys with the Miami Heat is set to be auctioned.

Sotheby’s announced it is auctioning off LeBron James’ game-used nickname jersey from 2014 game against the Nets.

Will be an interesting test of new hot market. Why? The jersey sold exactly five months ago for $87,000! pic.twitter.com/ilwdlSYevt

The game in which James wore the jersey took place on Jan. 10, 2014 against the Brooklyn Nets.

The superstar erupted for 36 points, seven rebounds and five assists in the double-overtime contest. However, the Heat lost to the Nets by a score of 104-95.

Still, the jersey with the special nickname is rare. The Heat only wore jerseys with nicknames on the back a handful of times during that 2013-14 season.

Recently, a rookie card of James sold for a gargantuan $1.8 million. The three-time champion’s popularity has been soaring through the roof.

After all, James is one of the greatest players in NBA history.

Now, the Los Angeles Lakers All-Star is trying to add to his championship collection by winning a ring with the Lakers in Orlando, Fla.