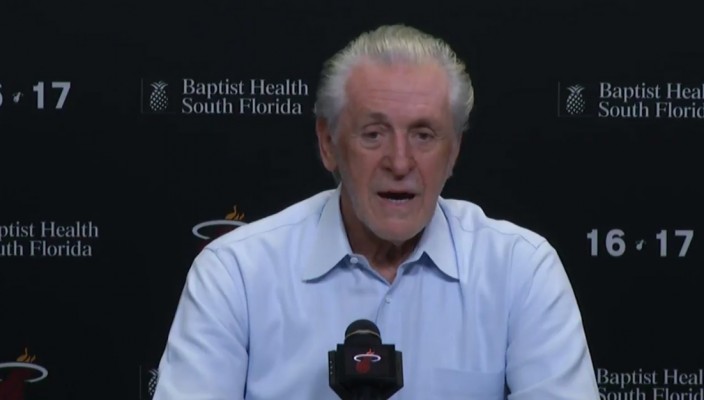 After having just missed reaching the playoffs this season, the makeup of the Miami Heat for the 2017-18 season is likely to be much of the same as this year. The reason is that the person whose vision shapes the franchise, team president Pat Riley, is the one making such statements.

Riley spoke to media at a season-ending press conference on Wednesday, offering comments on a variety of topics. However, it was his assessment of the current squad that garnered much of the attention. While disappointed about not reaching the postseason, Riley says he has solid hopes about the overall potential of the current unit, which includes key free agents Dion Waiters and James Johnson:

“I love this group of guys. I love this group of guys to build this team from. I hope Dion and James and the rest of our free agents to like it here enough. We’re going to be fair with them and [hope] they will be fair with us,” Riley said. “I care about the team that I wanted them to experience this [playoff] competition. It would have been fun and really validated all the work they put in. Their performances and their conditioning and all the challenges each player put themselves through validated… that they’re in the right organization. It’s not a big step back. It stops the week of having fun.”

Riley was enthusiastic about what Justise Winslow can bring to the Heat and dismissed the second-year player’s struggles on three-point attempts, noting that his status as a member of the team won’t be changing:

“I’ve been around players like Justise Winslow for a long time. He is a warrior, defender, cares about winning, has tremendous energy. The guy had a tough ride this year. He had a sprained wrist and played with it. Separated his shoulder, had that surgery,” Riley said. “I took a look at a lot of those guys like Justise who came in as one and done guys. Kawhi Leonard averaged eight points a game his first year. Six years later, he’s 25. We are measuring this guy after 75 games. That’s unfair.

“I wish you would get off his three-point shooting… He will make enough of them. When you have Dion and Wayne Ellington and you have James and Tyler and you have others and Goran, you are going to need a player that’s sort of like the backbone of your team, a glue guy. It bothers me when you’re taking away from a guy who is 75 games from being on the court. It’s unfair to him. Give him a chance. He ain’t going anywhere. I’ve read where you can package him here, package him there. He has something to prove. There’s no doubt. He will prove it. He’s a winner.”

Another person whose status isn’t in question is Miami head coach Erik Spoelstra:

“Erik is one of the best coaches in the league… Unlike me, he is measured. He stays on message. Players respond [to that]. Players don’t get confused by the message…. At 11-30, he was beside himself. He had never been there. He learned a lot about himself at that time,” Riley said. “We were in LA and we took that hit against the Lakers. I walked into his coaching office and I said, ‘Coach ‘em up.’ That’s what he did. He coached the hell out of them.”

“I don’t know if there are two tougher minded guards than Dion and Goran. Dion has this affable defiance, which he and I talk about all the time, which I like. The two of them, with how they play, the did complement each other. Both are attackers. Dion can create space, get to areas of the court, where he can get up shots [late in the shot clock].

“He is going become a better finisher, higher percentage. He gets into the paint 14 times a game. He realizes now what it takes to be a great player…. Here he played 30 plus minutes a game and got starter’s minutes, and you saw during those times, he could be efficient. We want to improve his efficiency. The consistency in minutes increased the efficiency.”

Finding a way to get past the current elite teams such as Cleveland, Golden State, San Antonio and Houston remains a stiff challenge. Riley acknowledges that the job is difficult, given the constraints of the league’s salary cap:

“If you are looking at Golden State and Cleveland, those teams and Houston and San Antonio, the top four teams in the league, what happens to the other teams in the Eastern Conference, yes, you have to say to yourself, I want to get there as quickly as I can and contend,” Riley said.

“Even if you brought all of these guys back with the 14th pick and some kind of room exception, can you beat those teams? You will never know until you get there. I think the fans here appreciate what we do. They also appreciate we want to bring more quicker to the table. I want to play for that [championship]. That’s what we want to compete for. That’s what it has always been about. You don’t have to go whale hunting. You can acquire key players via trade, instead of laying out $38 million for a guy. Some of these max numbers are ridiculous. That’s the nature of the collective bargaining agreement.”

“We don’t rest players. It has reached the point where it has become an absolute travesty, blatantly so. We maintain players. Let’s put a little more integrity into that concept of rest.”