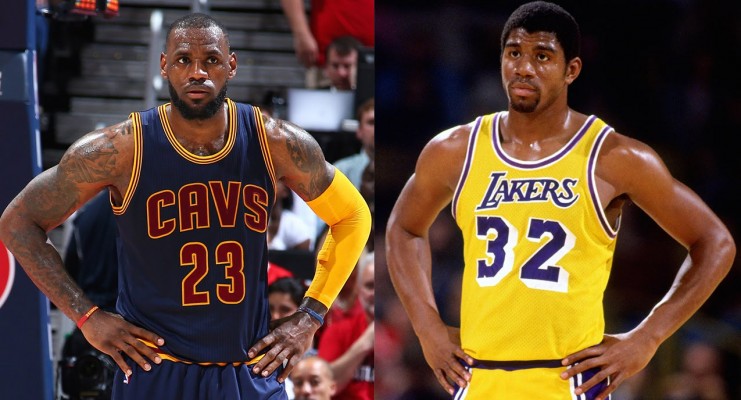 Miami Heat president Pat Riley and Los Angeles Lakers president Magic Johnson may be management rivals now, but they have a special bond that endured the success and breakup of the “Showtime” Lakers.

On Monday night, the two living legends met at the Conga Room in Los Angeles for a discussion moderated by Cari Champion of ESPN and they reminisced on their dynasty of the 1980s. They also shared insights about champions in the current era and one three-time champion was brought up multiple times: LeBron James.

Specifically, Riley said that Johnson would beat James in a game of one-on-one, and his reasoning is interesting to say the least:

Pat Riley says Magic Johnson would beat LeBron James in a game of one-on-one. It'll make sense when you hear him explain why. pic.twitter.com/4p64MJsSJp

“You wanna know why? He (Johnson) would never call a foul … and LeBron would respect him as an elder,” Riley said.

Johnson and Riley both praised James for his accomplishments profusely, but Riley emphasized while James’ seven consecutive trips to the NBA Finals was impressive, it was still a bit shy of Johnson’s nine trips in 12 seasons.

Then, Riley, the former Lakers head coach who had won four NBA championships in nine seasons with Johnson on the team, called the legendary point guard the “greatest player of all-time.”

Pat Riley on Magic Johnson: "He's the greatest player of all time."

Johnson is a contender for that lofty title, but the biggest takeaway from Monday night’s discussion came from a joke Riley told about possibly executing a trade with Johnson.

“It depends on who calls who,” Riley laughed. “If I called him first, then he ain’t gonna say anything. And if he calls me first, I’m going to say, ‘I know that I can make your team better.’ Let’s have a conversation. Let’s do this, forget about the cap ramifications and start talking about player personnel … and before you know it, I get a treasure of players.”

Riley and Johnson are larger-than-life figures who will battle to get free agents this summer, but their longstanding friendship was on full display at this event.
[xyz-ihs snippet=”Responsive-ImagenText”]