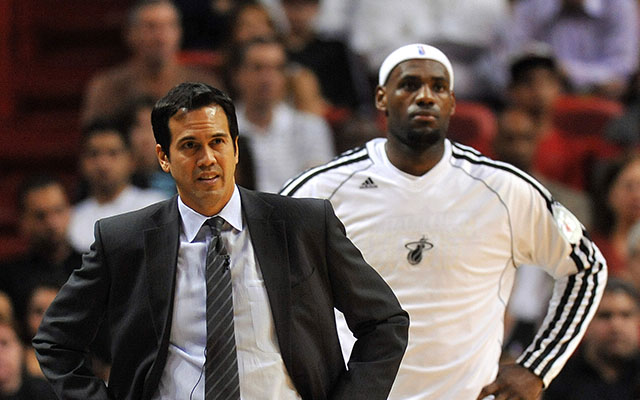 Miami Heat President Pat Riley hasn’t made a lot of comments on LeBron James’ decision to leave the Heat in July of 2014.

However, in a new book by Ian Thomsen called “The Soul of Basketball: The Epic Showdown Between LeBron, Kobe, Doc, and Dirk That Saved the NBA,” Riley gives some insight into many of the things that went down during the Heat’s “Big 3” era, including how James seemed to push Riley to replace Erik Spoelstra as the Heat’s head coach.

Riley says that this occurred the day after the Heat lost to the Dallas Mavericks on Nov. 27, 2010, which left their record at 9-8. In that game, after the Heat called a timeout, LeBron bumped Spoelstra on his way to the bench.

The excerpts from the book are highlighted in an article written by Jackie MacMullan for ESPN.

Riley revealed in the book that the day after the Heat’s loss to Dallas, he asked James, Dwyane Wade and Chris Bosh to meet him in his office for 10 minutes to check on how the team leaders felt the young season was progressing.

“They just said, ‘We’re not feeling it,’ or something like that,” Riley told Thomsen. “We talked about the typical things that we have to do, have patience and all of that stuff.

“And I remember LeBron looking at me, and he said, ‘Don’t you ever get the itch?’ I said, ‘The itch for what?’ He said, ‘The itch to coach again?’ I said, ‘No, I don’t have the itch.’ He didn’t ask any more questions, and I didn’t offer any more answers. But I know what it meant, and I always go back and wonder about what he was thinking at that time. He walked out scratching his leg like it was itching.”

Riley also mentions how the idea had originated during the Heat’s 2010 free-agency pursuit of LeBron.

“They wanted to know what was going to happen with Erik,” Riley said. “They wondered if I was going to be coaching. I said, ‘Look, Erik is the head coach, that’s it. I support him. I’m not interested in coaching.’

“The thought was in their mind at times that maybe I would come back and coach, I think. But I was truly done, I didn’t want to get back into it, and Erik is a hell of a coach. He was coming off two good playoff years, but he had not been coaching three superstars. And then with the whole LeBron effect, it would have been a tough transition for any head coach with two years of experience.”

The Heat, who have kept Spoelstra as their head coach to this day, finished the 2010-11 season with a 58-24 record before losing to those same Mavericks in the NBA Finals in six games. The team would then win two championships in three years before LeBron decided to return to the Cleveland Cavaliers.