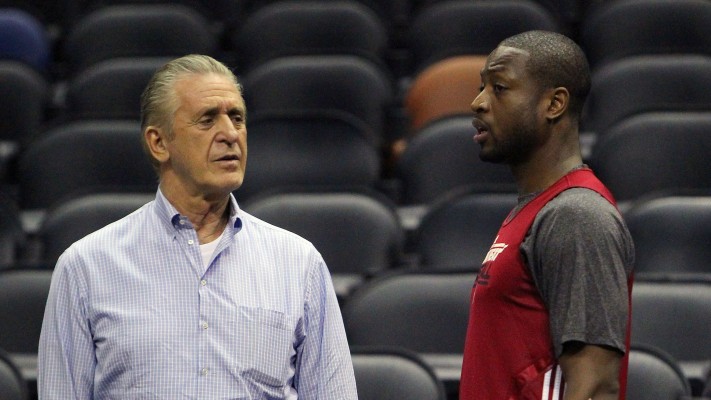 For more than two decades, Miami Heat president Pat Riley has been an integral part of the team, including his tenure as head coach, a stretch that included capturing the first of the franchise’s three NBA titles. However, last summer’s failed negotiations with Dwyane Wade left Riley frustrated over the miscommunication that led to Wade’s departure to the Chicago Bulls.

ESPN.com‘s Wright Thompson looked at Riley’s struggles over the past few years in keeping a perennial contender together. After losing LeBron James to free agency in 2014, Wade was re-signed to a one-year deal the following year, with the expectation that he would renegotiate another deal with the Heat afterwards.

The belief that Wade would remain in Miami was strong enough that Riley and his staff had focused on potential free agents that could’ve been brought in to help the veteran dethrone the NBA champion Cleveland Cavaliers, whose main component was James. Yet Wade eventually returned to his hometown of Chicago to sign a two-year deal with the Bulls.

Midway through this past season, Wade finally indicated why he shattered what had seemed like an unbreakable bond with the team: Riley didn’t contact him during the negotiations. Wade considered it an insult, given how instrumental he had been in helping the Heat win all three of their championships.

However, Riley says that he was told that Wade’s agent wanted to deal directly with the Heat’s owners instead of him when it came to negotiations. Riley agreed to the request, though the decision has caused him plenty of regret since:

“I know he feels I didn’t fight hard enough for him,” Riley said. “I was very, very sad when Dwyane said no. I wish I could have been there and told him why I didn’t really fight for him at the end. … I fought for the team. The one thing I wanted to do for him, and maybe this is what obscured my vision, but I wanted to get him another player so he could end his career competitive.”

According to Thompson, the James departure actually played somewhat of a role in Wade leaving two years later:

“Riley says, almost immediately after LeBron left, Chris Bosh‘s camp wanted to reopen a deal they’d just finished, knowing the Heat had money and felt vulnerable. Bosh threatened to sign with the Rockets. In the end, Riley gave Bosh what he wanted. Now he wishes he’d said no to Bosh’s max deal and given all that money to Wade.”

When Wade did leave, Riley was aggravated enough to leave the country for 10 days, traveling to Paris with his wife. Even after returning for Heat head coach Erik Spoelstra’s wedding, Riley remained focused on not being able to re-sign Wade during the reception.

Last year, Riley signed a new five-year contract, with the understanding that he can work from anywhere, though his remarks last week about the current team’s makeup and the potential to add some key free agents to the mix may keep him in Miami.
[xyz-ihs snippet=”Responsive-ImagenText”]