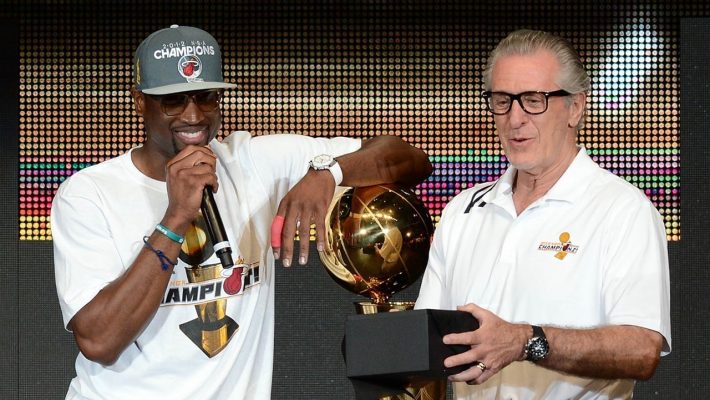 The guard accepted the Heat’s veterans minimum contract of just $2.4 million for the 2018-19 NBA season. While everyone is elated Wade is back, the deal marks a sad reality. In his 16 seasons with the franchise, Wade has never been the Heat’s highest paid player.

Yet, Heat president Pat Riley is ecstatic to have the three-time champion back for one more run:

“We are very delighted that Dwyane decided to return,” said HEAT President Pat Riley. “I believe that Dwyane can play a big part in us winning, that’s what he is all about. I’m glad he’s back.”

Wade, 36, will be taking part in a competitive season for a team looking to make the playoffs for a second straight year. However, don’t let the age fool you. Just because the veteran is on the edge of retirement doesn’t mean he doesn’t have a lot left in the tank.

In fact, during last year’s playoffs, the former NBA Finals MVP was the team’s second leading scorer with 16.6 points a game. After getting traded to Miami from the Cleveland Cavaliers last season, Wade put up a modest 12.0 points and 3.4 rebounds in 21 games off the bench.

Now that guard Dion Waiters may be out to start the season, Wade might have more on his plate. While the Waiters news is disappointing, Heat fans won’t complain too much since that means the Heat icon gets more playing time. Every minute will count and every second will be worth watching as it will be the last run of the franchise’s greatest player.
[xyz-ihs snippet=”HN-300×250-TextnImage”]