Don't Miss
Home / Media / Pat Riley: ‘Miami Has All the Elements of a Championship Team’

Pat Riley: ‘Miami Has All the Elements of a Championship Team’ 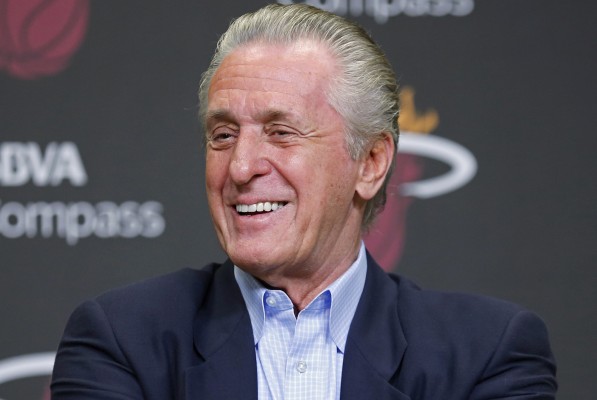 Miami Heat team president Pat Riley is looking to inspire his team just a few weeks before they start to get ready for the 2015-16 season by saying that the Heat have all the elements of a team that could win an NBA title.

Riley spoke those words on Dan LeBatard’s radio program, with the Miami Herald noting them in an online column on Wednesday. Riley also spoke about the drama involving the re-signing of Dwyane Wade, being with the franchise for 20 years and how he motivates himself after a career filled with success.

Regarding the outlook for the upcoming year, Riley said:

Riley acknowledged that he had a certain amount of bias in that belief, saying:

“You know what I’m going to say. I was a coach, and I had five guys off the street, I would say we could win a championship. That’s either my naivety or competitive will.”

The situation with Wade was contentious once the offseason began, but the two groups worked out a one-year deal that satisfied both sides, with Riley saying:

“Deep down in my gut, Dwyane is a lifer here…It got a lot more personal in a good way because the owner got involved in it because that’s how much we care about Dwyane.”

Riley also spoke warmly of his relationship with Micky Arison, and was again very positive about the team’s chances, saying:

“I feel blessed to be in one city with great people I’ve been with for a long time, a great owner in Micky, his wife Madeleine. We’ve become more than just boss and employee. We’ve become very good friends.

“I’m excited about this season. I really am that we’re headed in a direction where we have a lot of firsts behind us and we’re going to start a new one.”

The comments were Riley’s first in over two months, but reinforced the idea that he remains focused on getting Miami back among the NBA’s elite. That push is no doubt also attempting to send a message to 2016 free agent Kevin Durant, the top prize in next season’s offseason grab bag.
[xyz-ihs snippet=”Responsive-Ad”]