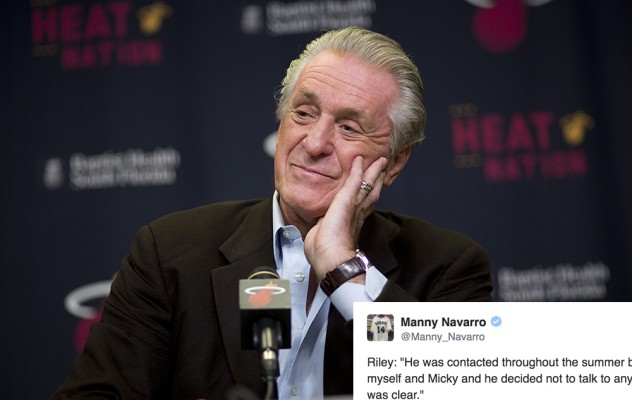 The Chris Bosh saga doesn’t look to be going away any time soon as the power forward recently released a video saying how his playing career wasn’t over, while subtly taking jabs at the Miami Heat’s front office.

One name in particular whom Bosh seems to be targeting over and over is Heat president Pat Riley. In his most recent video, the All-Star forward states that he “didn’t get a call or text or anything like that,” in regards to Riley’s announcement that Bosh’s career with the Heat was over.

Bosh also went on to say the following:

“I guess my career in Miami is done. My career is not done.” said the forward who has played the last six years for the Heat. “That does not mean my NBA career is over. There’s 29 other teams.”

All in all, it’s evident that the former Georgia Institute of Technology product is not happy with how his career is presumably ending in Miami.

In a similar notion, Riley doesn’t seem to be too thrilled with how Bosh is depicting the Heat in the media.

The Heat president is refuting Bosh’s claims about not receiving contact from the Heat organization by saying that the Heat had tried contacting the forward several times but to no avail.

Remember, at one point in all this Bosh fired his agent. That said, Riley told me and 4 others on Monday Bosh was one cutting communication

Riley: "He was contacted throughout the summer by Coach Spo, myself and Micky and he decided not to talk to any of us until he was clear."

I've also been told by a #Heat spokesman Riley reached out to Bosh's agents and manager and heard nothing back.

At this point, it’s unclear as to who is speaking candidly, however, one thing is for certain: things are about to get really messy in Miami.
[xyz-ihs snippet=”New-Responsive”]