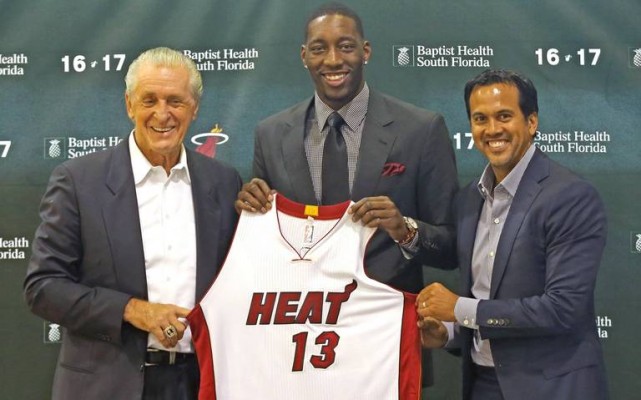 Miami Heat president Pat Riley and head coach Erik Spoelstra spoke glowingly about what the future could hold for Bam Adebayo, the Heat’s first-round draft choice, during his introductory press conference on Friday.

Even though many analysts across the country questioned the Heat’s decision to pick the 6-foot-10 forward from the University of Kentucky, Riley confidently proclaimed Adebayo will be one of the best players the franchise has ever drafted:

“One day,” Riley said as Adebayo held up his No. 13 jersey, “this jersey is going to be hanging up in the rafters.”

Riley may have been exaggerating a bit, but he also went on to compare the 19-year-old to NBA legend Shawn Kemp:

“I remember when I was coaching back in L.A.,” Riley, who coached the Los Angeles Lakers in the 1980s, said. “Jerry West called me on the phone and he said, ‘I want you to come over to Loyola. I’m going to be working out a player,’ you know, back in the ’80s. He didn’t tell me who it was. I went over there and it was an 18-year-old high school kid by the name of Shawn Kemp.

“When I saw [Adebayo] in our gym here, I leaned over to Chet [Kammerer] and I said, ‘He reminds me of Shawn Kemp.’ At least physically and the mature, already developed athletic body for professional basketball. So that was a comparison and we all know what kind of career he had.”

Adebayo said that, as a kid, he had tried to pattern his game after Kevin Garnett’s. His new head coach was pretty excited with the comparison to the 15-time All-Star.

“I’ll take that one of Kevin Garnett,” Spoelstra said. “We have no problem with that but we also would like to maybe work on thinking differently with him and him becoming the best Bam that he can become. Maybe that’s somebody that 20 years from now younger kids emulate and try to copy his game.

“I’m still stunned by a young man this large and athletic and explosive that can move his feet and be that light on the ground. We think that fits to our defensive system, our style and the way the league is going you need guys that can show that kind of quickness. He can also punish teams in the paint at the rim. … So, we love him.”

Even with all of the lofty compliments about his on-court skills, Spoelstra pointed to Adebayo’s journey to the NBA as evidence of his willingness to push through adversity:

“A great story that we really connected with,” Spoelstra said. “And it’s taken a lot for him to get to this point to be a professional basketball player. We believe in these kind of stories, guys that have to show perseverance and great individual character. That matters. That matters in this league.”

For those that are unfamiliar, the North Carolina native grew up in a green single-wide trailer home with his mother, Marilyn Blount, who had to work long hours as a cashier to provide for the family. Often times, Adebayo noted, she would be asleep by the time he got home because of her work schedule.

“It was hard for me because my mom worked so much,” Adebayo said. “I barely saw her and I was in school. She would come home from work, she would cook and go to sleep. So I come from practice and she would already be asleep. So it was like, ‘OK, good night.’ She woke me up every morning, even in high school she still woke me up. I guess it was a sense of her being a mother that she had to do it. She was always good to me. I never wanted nothing. She made sure I had everything I needed. Just having that just humbles you.

“I had a 1999 Ford Explorer and it was the color of some type of brown. But she got me a car. I was happy with that. When you’re pulling up to school sometimes, you look next to you and there’s some dude with like a BMW. I was just grateful that I had a car. I was always humble. I never took anything for granted.”

In fact, Adebayo takes a picture of that trailer home with him wherever he goes. He hung up the picture in his dorm room at Kentucky and plans to bring it with him to South Beach as a reminder of his humble roots.

“As a young man you never want to see your Mom struggle,” Adebayo said of Blount, who traveled with him to Miami and sat in the first row of the press conference. “So, I worked my tail off and I got here so my Mom will never struggle again.”

Adebayo is set to make $2.5 million this coming season.

While this inspirational story is bound to land Adebayo as a fan favorite, his worth to the franchise will have to be proven on the court. The 243-pound big man is scheduled to play in both the Orlando and Las Vegas summer leagues next month.
[xyz-ihs snippet=”Responsive-ImagenText”]