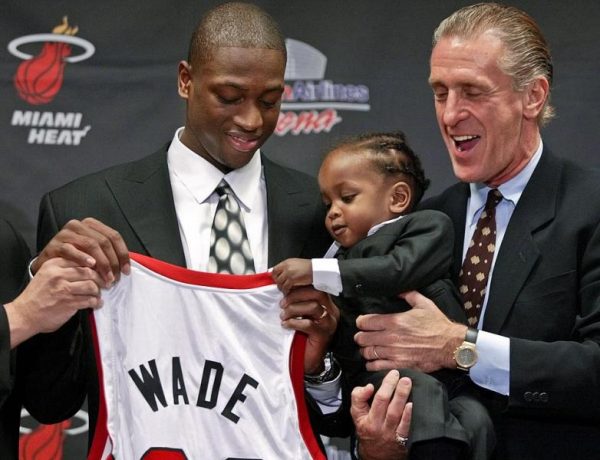 Miami Heat guard Dwyane Wade has established himself as a franchise icon and is currently approaching the final stages of his Hall of Fame career. Yet Wade’s storied career with the Heat might have never taken place if Pat Riley hadn’t been convinced into selecting him the 2003 NBA Draft.

Ryan Yousefi of the Miami New Times looked back at that year’s draft and cited a 2013 ESPN article to point out Riley’s original line of thinking.

“I’ve always wanted to coach veterans,” Riley said. “I’ve always preferred to coach 25- or 26-year-olds who had some experience. I also never believed that our team was ever going to be bad enough to think we’d get a high pick. But that year we ended up with No. 5, and I was looking at point guards and centers; that’s what we needed. I had guys like Kirk Hinrich, T.J. Ford and Chris Kaman high on our list, and I was interested in them. Dwyane was on there, but at the start of the process, I wasn’t sure.”

One unintended bit of luck also played a role in Wade’s selection by the Heat with the fifth overall pick. That came in the form of the Detroit Pistons selecting Darko Milicic.

“What. The. Hell. Detroit,” Yousefi wrote. “This was the moment all Heat fans knew something big was about to happen. This changed everything. Now the Heat would have Chris Bosh, Carmelo Anthony, or Dwyane Wade on the board when it picked.

“All the Heat had to do now was not blow it. The team just had to pick one of the best players in college basketball when he fell Miami’s way.

“The Heat couldn’t screw that up, right? RIGHT?!”

After Denver chose Carmelo Anthony and Toronto selected Chris Bosh, Wade became available. While Riley was ultimately convinced that Wade was the right choice, Los Angeles Clippers head coach Doc Rivers indicated back in December that the Heat had a plan in place if Wade had already been taken.

Miami would have traded their pick to the Orlando Magic, who Rivers was coaching at the time, which would have meant a drop of 10 spots. Wade was available, however, and Yousefi put into perspective just how big of a moment drafting Wade would ultimately become for the Heat franchise.

“And the rest, as they say, is history,” he wrote. “Here we sit in 2019, three titles and 13 All-Star appearances later. Wade, in his final season, just passed Michael Jordan as the best shot-blocking guard in NBA history.

“Wade put the Miami Heat on the map. That June day back in 2003 is undoubtedly the greatest day in franchise history.”

Eventually, Wade would join forces in 2010 with LeBron James and Bosh. That would result in four consecutive trips to the finals and NBA titles in 2012 and 2013. Those two championships gave Wade three during his Heat tenure, with his first coming in 2006, when he was named Finals MVP.
[xyz-ihs snippet=”HN-300×250-TextnImage”]