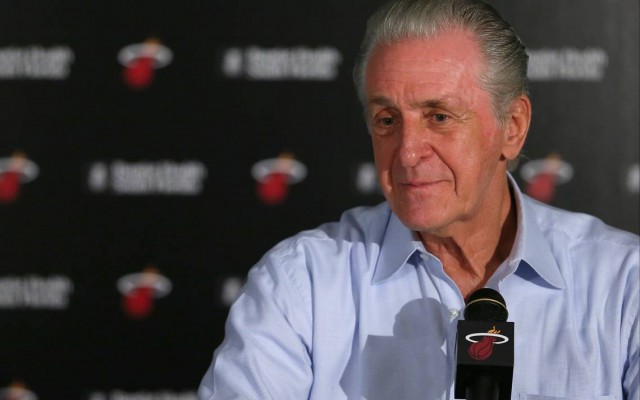 Throughout the summer it felt like the relationship between the Miami Heat and Chris Bosh was starting to turn sour because of the uncertainty of the star forward’s playing status. This past week Bosh failed a mandatory team physical and at today’s media day Pat Riley officially declared the end of his playing career with the Heat.

However, Riley didn’t just leave it there.

During the months leading up to the physical, Bosh had been on a social media flurry with workout videos and training clips hoping to rally fan support for his return. Filming and directing the video documentary series “Rebuilt” with Uninterrupted was a big component of this plan. In episode one of the video series, he spoke harshly about how he felt the Heat team doctors treated him.

“I felt right away that I was written off. It was just so just . . . put it to the side, and matter-of-factly. If a doctor tells me, ‘Hey, that’s it, and this is how it is,’ and I don’t buy that, I think that I have the right to disagree with you. I know inside me I have a lot of talent and a lot of ability. And I have it, I know I have it. It wasn’t a matter of if I want to play again, it’s when. So, we took the bull by the horns.”

This evidently seemed to bother Riley and he addressed it at today’s media session.

“It wasn’t like [gesture of washing his hands of it]. He wasn’t just written off. That may have been his attitude and his perception of it, because he didn’t want to believe what was out there. That bothered me. He wasn’t written off,” said Riley.

He wanted to emphasize that the Heat were prepared to work with Bosh every step of the way until he failed his physical, even going back to his first clotting episode that left him in the hospital for nine days.

“If there was a level of mistrust, I don’t know what he’s talking about,” Riley said. “Contrary to how this thing has been perpetuated in the media, we have worked very, very hard with Chris. I don’t know where that came from. We were there the whole time when he was in the hospital in 2015.

“We headed down the road very excited to a point where we thought it would work,” Riley said. “And then the physical couldn’t clear him to the next step.”

Riley also wanted to make sure his relationship with Bosh didn’t fizzle out as a result of this. Having already driven out Dwyane Wade and LeBron James, Riley would not be showered with praises if the last player in the Big 3 also took an adversarial stance.