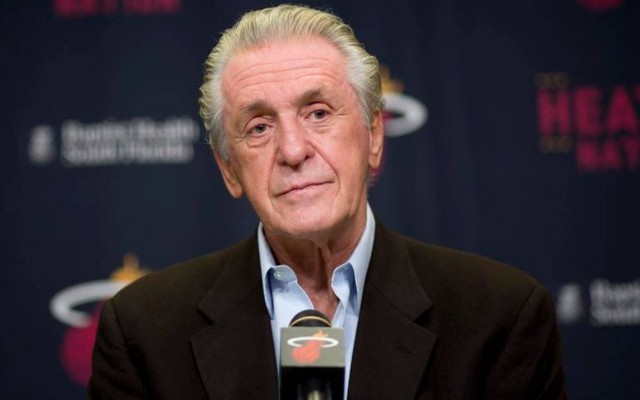 Pat Riley was the main factor in LaMarcus Aldridge signing with the San Antonio Spurs.

Yes, you read that right. The team president of the Miami Heat unintentionally led Aldridge to sign with the Spurs, according to a report by Adrian Wojnarowski of Yahoo! Sports. In the piece, Wojnarowski recalls five days of Aldridge’s life during the free agency period this past summer.

For those that remember, numerous teams such as the Spurs, Portland Trail Blazers, Los Angeles Lakers and Heat were in the running to sign the highly-coveted free agent. The Heat were considered a dark horse and a surprise to even make a run at the star power forward considering they didn’t have the salary cap space to sign Aldridge.

New details in the report clarify exactly what Riley’s strategy was in regards to bringing the four-time All-Star to South Beach, via Wojnarowski:

“The Heat didn’t have the cap space to sign Aldridge last summer, but Riley was hoping he would sign a one-year contract and wait until the following year before committing long term to a new franchise. That way, Miami could have been a possible destination. Other reports suggest he actually wanted Aldridge to sign for the mid-level exception and play for the Heat this year.”

That was quite the strategy deployed by Riley, who was already thinking of 2016 just days into the 2015 free agency period. However, what motivated Aldridge to sign with the Spurs was Riley’s message of “sacrifice” when it related to winning championships:

“Riley made a case to Aldridge that turned out to be an immense blessing for the franchise that had obliterated the Heat in the 2014 NBA Finals. As the idea of joining the Suns gained real momentum, Riley’s message would go a long, long way toward validating the Spurs’ cause. Truth be told, Riley’s words resonated as deeply with Aldridge as anyone’s in the process.

“He told me, ‘You’re a good player, but you can be great,’ ” Aldridge told Yahoo. “I’ve had good seasons on my own, but to win, you’ve got to have other big-time guys with you. When you have other guys who are willing to take that sacrifice with you – maybe you all go from averaging 23-24 points to 18-19 points – and you can all do it together.

“He was saying, ‘Hey, you might have to take a lesser role, but at the end of the day, you want to be known as a champion. Champions have to do different things.'”

What Riley was intending was for Aldridge to sign with the Heat with the knowledge that he’d have a chance at becoming a champion. However, he would have to take on a slightly lesser role playing alongside established players such as Chris Bosh, Dwyane Wade and Goran Dragic.

The message made sense to Aldridge to the point where it motivated him to sign with the Spurs and their cast of established stars in Tim Duncan, Tony Parker, Manu Ginobli and Kawhi Leonard.

Regardless of the end result, you have to give credit to Riley for at least trying to sign Aldridge, which would have clearly been the Heat’s biggest move in free agency since acquiring Bosh and LeBron James during the summer of 2010.
[xyz-ihs snippet=”Responsive-Ad”]