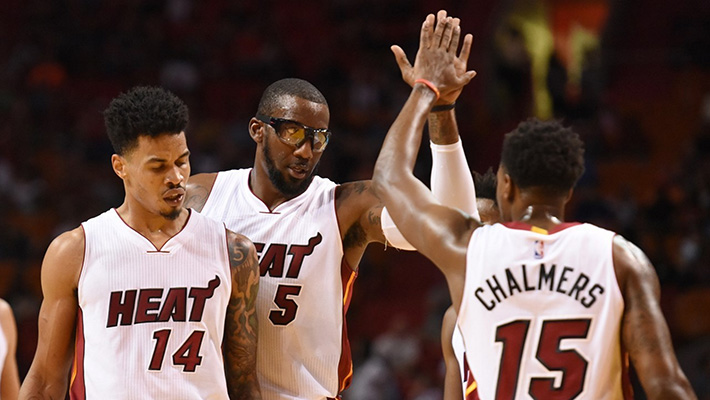 There is little doubt that the Miami Heat are on the rise.

With one of the most formidable starting lineups in the NBA and a deep bench behind it, the Heat have high expectations following a 37-45 season. Their expectations are so high, that an anonymous NBA scout believes Miami “is the sleeper team of the NBA,” according to Sports Illustrated.

Here is an excerpt of what the scout had to say:

“In my mind they’re the sleeper in the NBA—at least in the East. They’re coming into the season with good coaching and an abundance of talent… A big [question] is whether Hassan Whiteside can keep improving. Can he be consistent? The Heat are very big on fundamentals, very big on player development. I’ve got to think he’s going to be better this year.”

The scout not only covered Hassan Whiteside in his assessment, but he also went into detail regarding the backcourt of Goran Dragic and Dwyane Wade:

“I’ve always been a big Goran Dragic fan. In my mind, he’s an All-Star. Dragic and Dwyane Wade: That’s a hell of a backcourt. The x-factor is whether Dwyane stays healthy.”

A couple of traits he noted for why the 2015-16 Heat are such a sleeper team is due to “good coaching and an abundance of talent.”

The team is certainly stacked with talent but they have to prove they are a championship-caliber team. Prior to last Saturday’s preseason game versus the Houston Rockets, the projected starting five had never played an actual game together on the court.

Furthermore, the team continues to struggle with health and consistency. For example, Whiteside did not make his first appearance of the preseason until the Rockets game, due to a calf strain that hampered him for most of the training camp period. He also went 0-for-9 on free throw attempts in the game, an issue he struggled with during the 2014-15 season.

However, the only thing that matters is how the team will perform when the games matter. If the team starts to find its footing during the stretch run of the regular season, it’s scary to imagine the potential of this team during the playoffs.
[xyz-ihs snippet=”Responsive-Ad”]