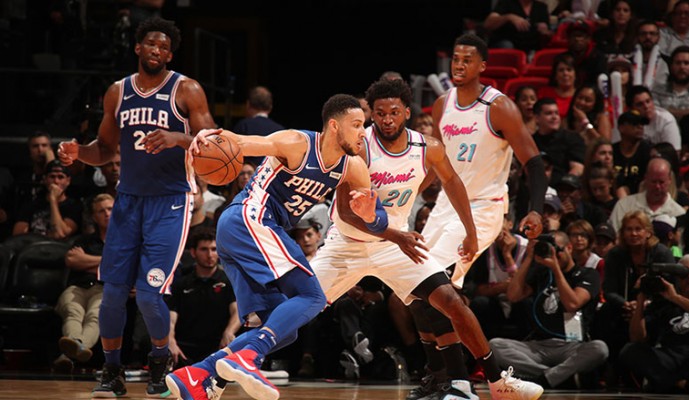 The Miami Heat enter the 2018 NBA playoffs as the sixth seed among eight teams in the Eastern Conference, with a seven-game series set to begin on Saturday night against the third-seeded Philadelphia 76ers. In the opinion of at least one oddsmaker, the Heat face a stiff challenge during that first-round matchup that may be difficult to overcome.

Heat enter series vs. 76ers as a pretty big underdog, per Bovada. pic.twitter.com/29Gnot4Iu4

The Sixers, a perennial doormat in recent years that had never come close to playoff contention, roared back to the postseason by compiling 52-30 mark during this past regular season. That resurgence was capped in a flourish as they closed out the regular season by winning their last 16 games. The 76ers are hoping that such momentum continues against the Heat.

In the season series between the two teams, the Sixers won the first two games before the Heat rebounded to win the latter two clashes. In the games at Philadelphia, each team blew a huge lead, though Miami ended up with losses in each game. The Heat’s first victory in this season series came on Feb. 27 with a dramatic basket by Dwyane Wade with 5.9 seconds remaining serving as the game-winner.

One factor that could aid the Heat in their opening game is the expected absence of 76ers center Joel Embiid, who continues to recover from a fractured orbital bone suffered on March 28. The injury took place when he and teammate Markelle Fultz collided in the Sixers’ game against the New York Knicks.

Following Saturday night’s game, the two teams stay in Philadelphia for Game 2 on Monday night before heading to Miami for a Thursday night game at American Airlines Arena.
[xyz-ihs snippet=”HN-300×250-TextnImage”]