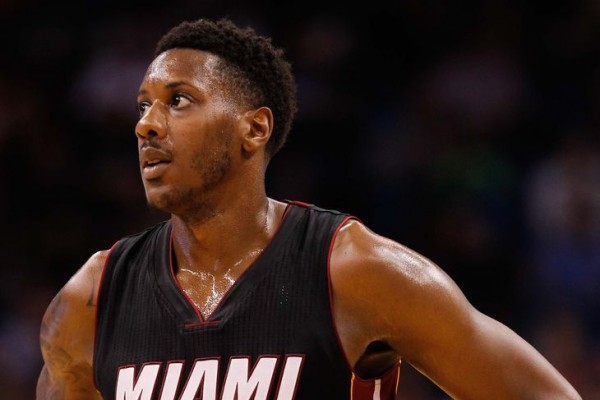 It has been another eventful offseason for Mario Chalmers.

Just a year after being signed to a two-year, $8.3 million contract by the Miami Heat, the veteran point guard has faced constant trade rumors this offseason as the organization looks to trim its payroll.

On Thursday, Chalmers appeared at a youth basketball camp and addressed the rumors surrounding a possible trade that would mean the end of his seven-year Heat tenure:

“Just see what happens. I haven’t spoken to anybody. When I had my exit meeting with Pat [Riley], he said the only way he would trade me was if he had to.”

The former second-round draft pick has spent his entire NBA career with Miami since being drafted in 2008. He has had just one head coach in Erik Spoelstra, and only Dwyane Wade and Udonis Haslem have had longer tenures with the organization.

Chalmers continues to remain resilient as he admits how difficult it has been to hear all of the rumors:

“I mean it’s kind of tough just hearing all the rumors and stuff. But you know, that’s what it was, was just rumors. I’ve just got to keep focusing on my game and keep my mind straight and keep fighting through it.”

The veteran point guard also stressed how Pat Riley has yet to state to him that he’s on his way out via trade:

“He didn’t say anything about that. So that was the end of the conversation. He said he would let me know. And then I’m still here to this day. So I’m not going to worry about it.”

The University of Kansas product is coming off of a season in which he averaged a career-high 10.2 points per game. During the 2014-15 season, Chalmers played a role on the team as a point guard, and also as a primary scoring option off the bench at shooting guard.

If he remains on the Heat this season, Chalmers stated that he expects to play mostly at point guard.

Despite the trade rumors, the seven-year veteran will continue to work on his game:

“People forget about what you do and what you have done. So I’m the type of person, I don’t worry about that. If it happens, it happens. If it doesn’t, it doesn’t. And I have one goal, and that’s to work on me.”