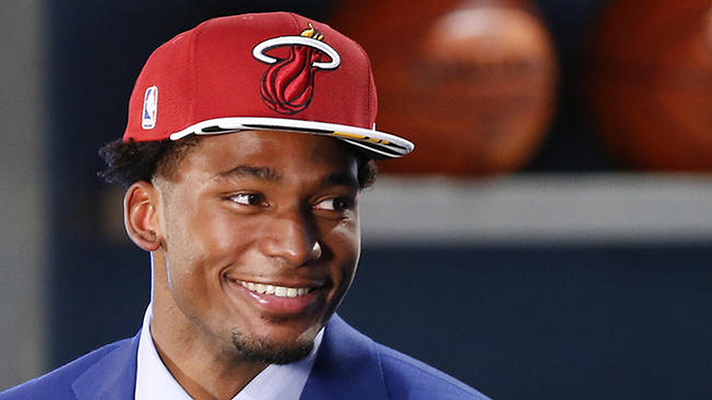 Justise Winslow might enter the 2015-16 season with a big chip on his shoulder.

After unexpectedly slipping to the No. 10 overall pick in the 2015 NBA Draft, Winslow was once again slighted—this time in a rookie poll given to his peers. 36 rookies were polled at this year’s NBA Rookie Transition Program on a number of topics including the 2016 Rookie of the Year and which rookie would end up having the best career.

Of those two topics, the Miami Heat forward didn’t receive a single vote in either category.

The Philadelphia 76ers’ Jahlil Okafor received 41.9 percent of the vote for Rookie of the Year, and received the most votes for best career. Stanley Johnson, Karl-Anthony Towns and Emmanuel Mudiay were the other rookies who received votes in both poll questions.

Recently, Winslow was asked whether or not he would be playing with a chip on his shoulder after falling lower than expected on draft night:

“When the draft was over, it is what it is. That’s the way I feel about it. But, for me, I use that as motivation. The people I listen to are my teammates, myself and my coaches down in Miami.”

However, there was some consolation for the No. 10 overall pick in other poll categories.

For example, Winslow tied for second place when the rookies were asked who could be the biggest steal of the draft. As far as the most athletic player in this season’s class, he was voted fourth. In the “best defender” poll, the University of Duke product was third. Fellow Heat rookie Josh Richardson also received some votes in the “best defender” category.

Regardless of what his peers may feel about him, the only thing that matters is how Winslow produces on the court. If he is able to produce and contribute right away for the Heat, he won’t have to worry about receiving respect from anyone.
[xyz-ihs snippet=”Responsive-Ad”]