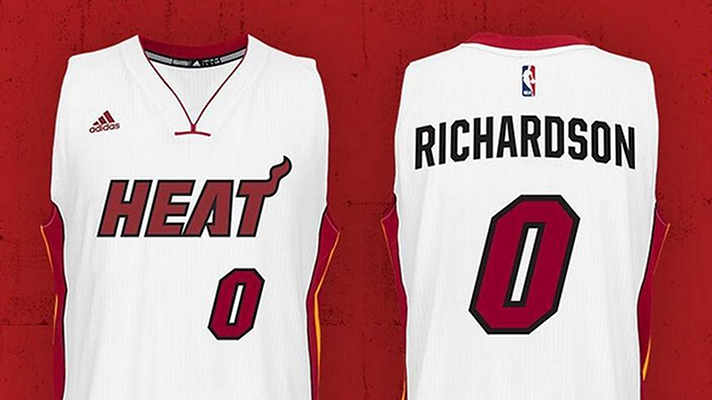 When Josh Richardson officially signed his first pro contract with the Miami Heat on Monday, it meant that the entire team was able to get their jersey numbers for the 2015-16 season.

Richardson will don the No. 0 jersey. He joins an exclusive club as he’s only the third player in franchise history to wear the number.

Outside of the second-round draft pick, a couple of other new players to the franchise selected their numbers.

While Richardson wore No. 14 during summer league play, Gerald Green will hold the number for the upcoming season. Green wore the No. 14 for the Phoenix Suns last season.

On the other hand, Amar’e Stoudemire will be seen with a jersey number he’s never worn in his pro NBA career—No. 5. After Henry Walker was waived last week, it meant that Stoudemire would not have to buy the coveted number after all. Stoudemire had worn the No. 1 jersey since 2007, and had the No. 32 for his first three seasons with the Suns.

On a side note, Chris Bosh has held the No. 1 jersey since joining the Heat back in 2010.

Stoudemire is the 11th player to wear No. 5, while Green becomes the eighth player in franchise history to wear No. 14.
[xyz-ihs snippet=”Responsive-Ad”]