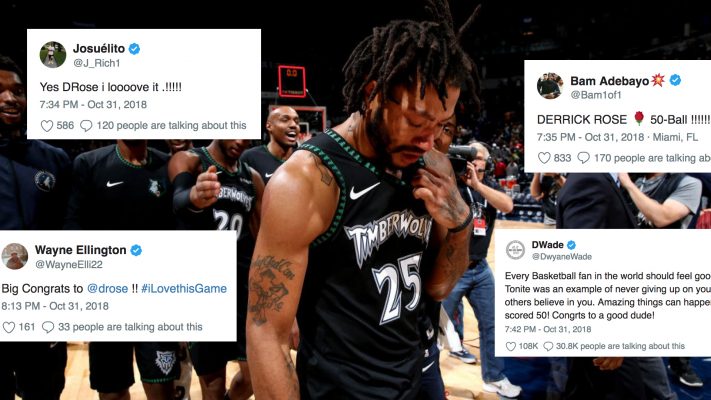 The NBA world was set ablaze Wednesday night due to Derrick Rose‘s 50-point performance against the Utah Jazz.

That boy @drose is out here straight HOOPING!!!!

Every Basketball fan in the world should feel good for DRose. Tonite was an example of never giving up on yourself and when others believe in you. Amazing things can happen. I’m smiling like i scored 50! Congrts to a good dude!

Many spectators of the game know the story of Rose, who’s had spectacular rises followed by deflating droughts in his career.

Yet Wednesday night he turned back the hands of time, scoring his career high in points at a time in his career when many have written him off.

Minnesota Timberwolves head coach Tom Thibodeau stated last week that as long as Rose is healthy, he’ll be one of the best players in the league. After Wednesday night’s showing, we may have to start believing that vintage Rose might be here to stay.