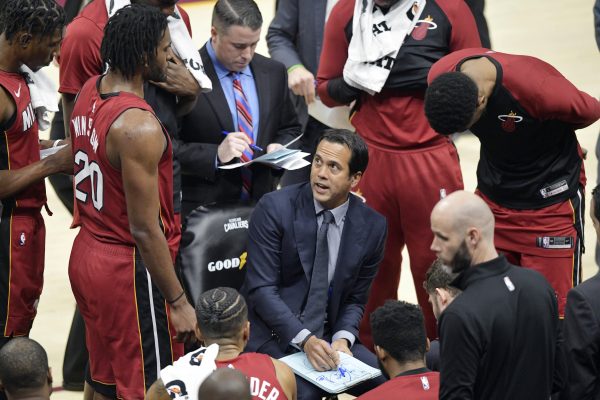 The Miami Heat got a huge win against the Boston Celtics on Thursday night, but according to multiple reports, Heat head coach Erik Spoelstra is far from happy with his players.

At first, the reason for Spoelstra’s irritation was unclear, but now, an unnamed player has come forward to clarify the situation.

Spoelstra as unhappy as I've ever seen him day after win. Repeatedly said not happy where team is at.

Spoelstra declined to specifically say why he's so irritated, but one player said staff is unhappy that they can play so great against good/marquee teams and so poorly against NBA's doormats.

The Heat have been playing some of their best basketball in the last month, but Spoelstra’s anger is justified.

In the last three weeks, the Heat have enjoyed big wins over the surging Houston Rockets, the Eastern Conference-leading Milwaukee Bucks, and the stacked Boston Celtics. They also nearly claimed victories over the Denver Nuggets and Toronto Raptors, two of the best teams in the NBA.

In that same time frame, however, they have lost to far less talented squads such as the Atlanta Hawks and Minnesota Timberwolves.

Still, despite the somewhat inconsistent performances, the Heat are 9-4 in their last 13 games. It’s the reason why their current record sits at 20-20 and why they currently sit atop the Southeast Division.

While Spoelstra’s anger makes sense, there is also little doubt that he is using it to motivate his squad. While the Heat currently have no true superstar in their prime, the roster is filled with blossoming talent and veteran leadership. That combination should allow them to win in bunches, especially against many of the lowly teams in the Eastern Conference.

At the moment, the Heat are on pace to make the playoffs this season. If they want to make sure they actually advance to the playoffs come season’s end, they’ll have to continue playing up to more talented teams, and start stomping on the throats of less talented ones.
[xyz-ihs snippet=”HN-300×250-TextnImage”]