Miami Heat: Luol Deng Vows to Be More of a Cutter This Season 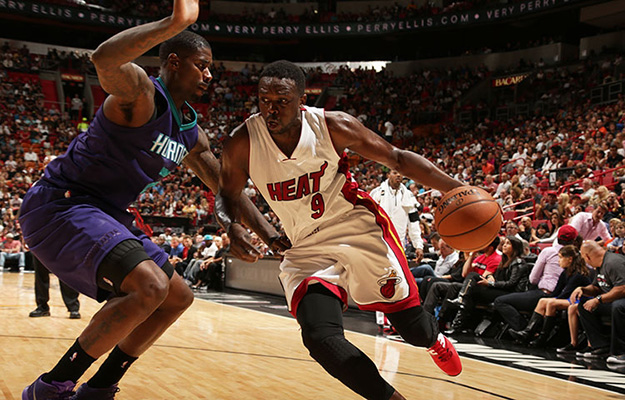 It’s hard to decipher whether or not Luol Deng’s first season with the Miami Heat was a success.

While the veteran small forward had decent overall stats on solid shooting percentages, he was hardly the difference maker the team envisioned when they signed him to replace LeBron James.

Though Deng did shoot 35.5 percent from beyond the arc last year, he expects to be more of a cutter than a spacer this season.

The 30-year-old stated his desire to do so in a recent interview with AM 790 The Ticket:

“Definitely, I want to get back there but at the same time, it helps me being familiar with the system. Last year, being new to the system, and everything the team went through, it was difficult to be consistent. I’m not asking to have the ball in my hand all the time. My strength comes off what other guys are doing. I play off of other guys.”

It is not just Deng who is stating more of a desire to be a cutter—head coach Erik Spoelstra also hinted at using the small forward more in this role based upon developed familiarity between the two individuals entering their second season together:

“We’re both more comfortable. It does take time to build a relationship and comfort level. We started to hit our stride in the spring. Luol is coming in terrific shape this year. I’m excited about him feeling more comfortable in our system.”

The 11-year veteran averaged 14.0 points on 46.9 percent shooting last season. However, the offense was very slow-paced, as the Heat ranked second-to-last in the pace factor category last season. This relegated Deng to being utilized as mostly a standstill shooter.

With the additions of Goran Dragic, Gerald Green and Amar’e Stoudemire over recent months, the team is expected to vastly increase the tempo of its offense. With this being the case, Deng’s strengths as a cutter should often be more seen in 2015-16 than it was last season.
[xyz-ihs snippet=”Responsive-Ad”]