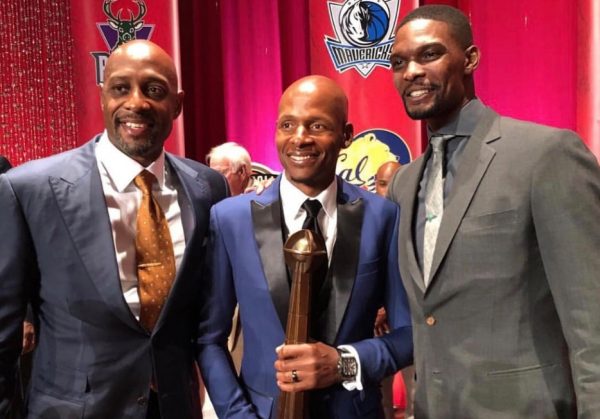 One of the best franchises in the league, the Miami Heat organization is like a family.

A couple Heat legends, including Alonzo Mourning and Chris Bosh, got together to celebrate the induction of Ray Allen into the Hall of Fame in Springfield, Mass. on Friday. Bosh, who hasn’t played basketball since 2016, congratulated the great shooter on the monumental moment:

Congratulations #RayAllen on the Hall Of Fame nod. Well deserved! It is a pleasure and a dream to call you a teammate and a friend. #18hoopclass #NBA #HOF pic.twitter.com/9K7hZIUgLa

Allen, 43, spent the two last years of his career with the Heat. While Miami won an NBA title with the sharpshooter in 2013, the team was thrashed by the San Antonio Spurs in the Finals in 2014.

Although Allen’s stint with the Heat was short, it was meaningful. In fact, Bosh, who called playing with the former teammate a dream, collaborated with Allen on one of the greatest playing sequences in NBA Finals history. The 6-foot-11 power forward corralled a rebound off a LeBron James miss and found Allen in the corner for a game-tying 3-pointer with 5.2 seconds remaining in Game 6 of the 2013 NBA Finals. The Heat went on to win the competitive contest in overtime and then Game 7 for the championship.

In his two seasons in Miami, the shooting guard averaged 10.3 points on 44 percent shooting from downtown. For his whole 18-year career, the two-time champion put up 18.9 points and 4.1 rebounds per game.
[xyz-ihs snippet=”HN-300×250-TextnImage”]