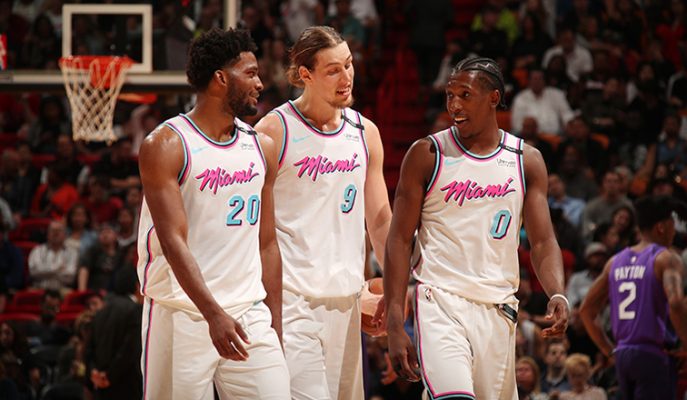 The financial catastrophes that have befallen countless NBA players are something that the Miami Heat’s Kelly Olynyk isn’t likely to experience during his career or afterward.

That’s because he continues to be scrupulous when it comes to spending and watching where his money’s going.

Shandel Richardson of The Athletic looked at how Olynyk’s approach toward finances haven’t changed. That’s despite the fact that he’s currently in the second season of a four-year, $50 million contract with the Heat. Olynyk rejects the term “frugal” when trying to describe his attitude:

“I wouldn’t say frugal. That’s kind of like being cheap. I’m not going to not tip somebody or do anything like that.”

When it comes to shopping for clothes, the 27-year-old Olynyk has the ability to pay for high-priced labels and designer fashions. Yet he continues to shop at places he patronized during his college days at Gonzaga University. One of his former teammates, Bobby Allen, says that one particular store remains a favorite of the veteran:

“He’s probably the only NBA player who still shops at Nordstrom Rack. He’s just so responsible about his money that he’s not going to buy some crazy-expensive jeans when he can just go there.”

“He’s just doesn’t care about labels. If it looks good to him, he’s going to wear it, whether it’s from H&M, Kmart or Target.”

A more recent example of Olynyk’s rejection of extravagance could be seen after the Heat’s final game in Dallas before the All-Star break. Instead of ordering a limousine to take him to the airport for his commercial, he called for an Uber driver.

The reality is that Olynyk isn’t simply sitting on his money either, according to Richardson:

“Olynyk owns at least 600 rental units in Washington and Arizona while also receiving income from a place he rents out in Boston. His entrepreneurial efforts will only grow once his playing days end.”

A simple philosophy when it comes to money is how Olynyk looks at the situation:

“Some people can say I’m good with money because I save money. Others could be like, ‘You’re not good because you missed some opportunities to invest.’ It definitely (depends on) how you look at it. I think I have a grasp on it, knowing there are a lot of things in life as far as needs versus wants. That all comes down to money. The more wealth you can share with the people around you lets you know how good you are with your money.”

In the final two seasons of his deal with the Heat, Olynyk is scheduled to make just over $26.6 million, with the second season being a player option.
[xyz-ihs snippet=”HN-300×250-TextnImage”]

bobby allenFeaturedkelly olynykmiami heatNews Tickersam dower
← Previous Story James Harden Showers Dwyane Wade With Praise: ‘One of the Best to Do It’
Next Story → Pat Riley Admits Disappointment With Miami Heat: ‘Sometimes You Don’t Get Where You Want’