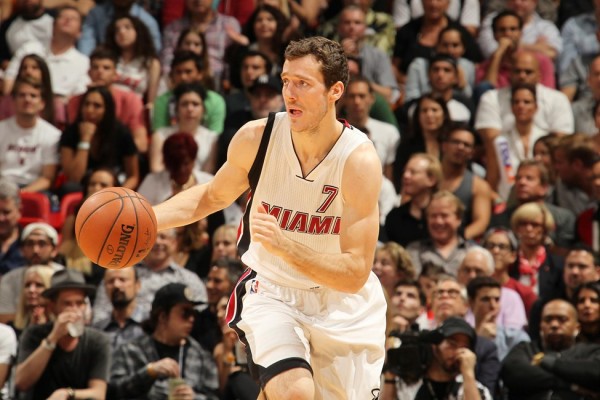 Through the first month of the season, Goran Dragic looked like a lost soul.

Instead of the aggressive and efficient point guard fans became accustomed to seeing over the past few years, people were treated to a tentative version of the point guard who previously was an All-NBA selection as recently as the 2013-14 season.

However, over the past two games, the Miami Heat point guard has looked like his “old self.” Dragic has averaged 15.5 points and 7.5 assists on 59.1 percent from the field and 71.4 percent from beyond the arc in wins over the Oklahoma City Thunder and Cleveland Cavaliers, two top teams in the NBA.

Those averages are a huge difference in comparison to his miserable month of November, which saw Dragic average just 10.8 points and 4.1 assists on 42.4 percent from the field and 22.9 percent from three-point range

Is this a sign of a turnaround or just merely a couple of good games from the eighth-year point guard? Dragic stated that he’s starting to find comfort within the offense and with his teammates:

“It’s just how I feel right now on the court. I know where I need to put the ball for D-Wade, C.B. or for everybody. It’s a much easier job when you know what to expect on offense.”

Chris Bosh explains that the Heat are setting screens for Dragic to encourage him to play his style:

“We’ve been setting screens to get him free and encouraging him to play the way he is capable of playing. We needed him to go out there with a free mind.”

Head coach Erik Spoelstra commented on Dragic’s recent strong play, stressing that it’s the Slovenian guard’s perseverance that has resulted in his “breakthrough”:

“It was all about just sticking with it. Like I said before, I love his approach. All this swirling around and he just kept on coming in early, getting with assistant coach Chris Quinn and working every single day to try to get better. When you want to have breakthroughs, sometimes they’re not on your own time.”

The Heat will enter Monday night’s game versus the Washington Wizards at American Airlines Arena with a 12-6 record—the best record in the Eastern Conference.